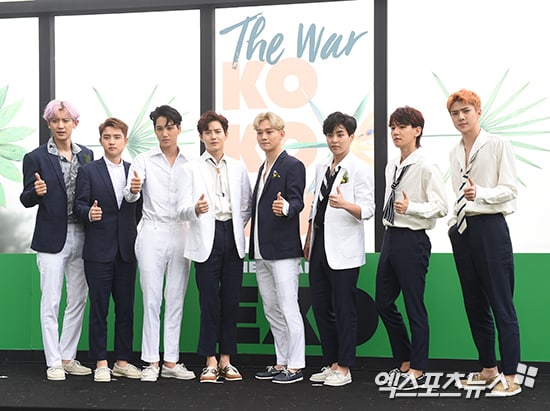 On July 18, EXO attended the press conference for their fourth album “The War” and talked about junior groups as well as the significance behind the music from their new album.

When asked which junior groups they’ve had their eyes on, EXO’s Suho responded, “Even though we’re from the same agency, NCT [has caught our eye]. But really all of our juniors are doing well. Other than NCT, we also know Wanna One’s dance and watch other juniors’ performances. Watching their performances pushes us to prepare all the more diligently.”

In regards to their upcoming album, which aims to send a message of hope all across the world, EXO said, “We tried our hand at this because we always need to be showing new sides of ourselves to fans. There are a lot of unfortunate things happening all around the world, not just in Korea, so we wanted to sent a hopeful message out [through our music]. We would like to see a world that comes together through music.”

See Also: 10 Of The Funniest Twitter Reactions About EXO’s Comeback

The group continued, “We celebrated our fifth debut anniversary together not long ago and have been preparing all the more diligently. We don’t know what the results will be like but we know that we want to spend a happy year with our fans.”

Meanwhile, EXO beat their previous record for pre-orders with “The War” and will be dropping the MVs for “KoKoBop” tonight at 6 p.m. KST.