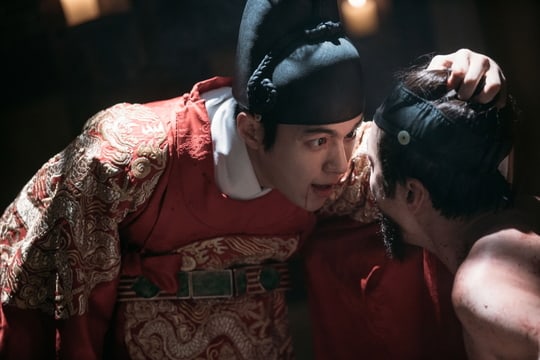 At his most recent interview, INFINITE’s L spoke about the many things he wants to do and answered each question with the earnestness that we all love. Instead of a rookie’s anxiety, L exuded the passion of a young artist.

This was on full display in his character, the commoner Lee Seon, in the MBC drama “Ruler: Master of the Mask.” For L, this was the ideal character. In the drama, Lee Seon changes into a rather nasty character. He begins as a lowly, slightly childlike character who encounters conflict and is finally overcome with personal greed after becoming king. He misunderstands the love and friendship of the crown prince Lee Seon toward Ga Eun, and morphs into a greedy and selfish character from that sense of betrayal. This transformation was truly brought to life on the screen by L.

L explained, “I considered the full image first. The viewers started with commoner Lee Seon from the first episode, but I started by thinking about his life before that. What was his past like? How did he come to love Ga Eun? There are five years in between his transformation from a commoner to a king, so I imagined to myself how he lived during that time. I really felt I got into the character.”

Moving from the position of commoner all the way to the throne in the stratified society of Joseon provided an array of internal and external aspects for commoner Lee Seon to express. While displaying the physical change was important, L really focused on the identity aspect. This is because an innate identity cannot be changed, even if the status does.

To depict Lee Seon’s cowering character, L chose to have his crooked neck as the character’s trademark. “This was an intentional and directed neck position. In addition to his origins as a commoner, Lee Seon isn’t the real king or even a puppet king. He has an inferiority complex to the crown prince and thus is always hunched over. Even when he is pretending to stand straight. When the crown prince comes to meet my character, he cowers. When he darkens, he becomes more honorable.”

After becoming king, L had to act with his face hidden behind a mask. Here, the expression of his voice, physical actions, and eyes were vitally more important than facial expressions. This was not an easy task for a rookie actor like L. However, he believes this experience has greatly improved his acting skills. L stated, “Because I couldn’t show my face it was very hard at first. Even if I made expressions, no one would be able to see them. Later on I got the hang of it. It seems like I improved my delivery abilities by focusing on the emotion of my eyes and my voice. I think this will prove helpful in future projects.”

When asked how he usually practices acting, L stated, “I think the voice in the most important part of acting. I also watch the playback of scenes. If I watch something I have already filmed and feel dissatisfied with it, it becomes study material for me. Negative comments also are very helpful. It is a little hurtful, but I can take it. There is a difference between real criticism and just hateful comments, though. I am the type to look at any material about myself. If there are a thousand comments about me, I read them all. If I can fix the points people have criticized me for and later do better, won’t those same people look upon me well in the future? I really want to develop.”

What did you think of L’s performance?