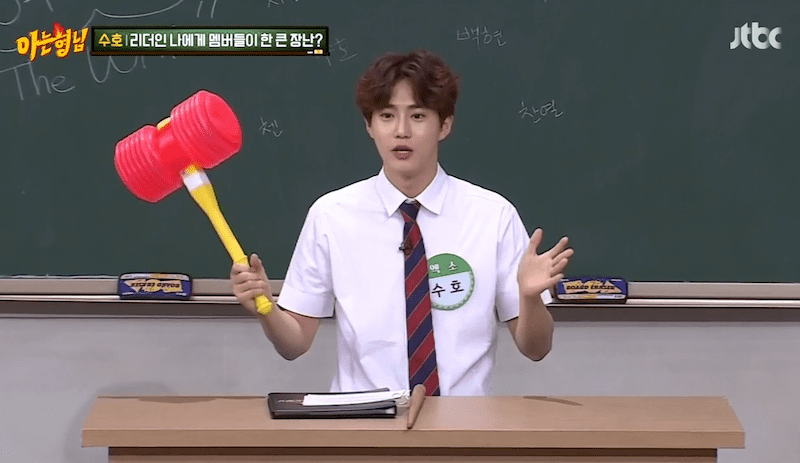 It seems like EXO’s way of showing love to their leader is with some good old-fashioned humor.

The idol group recently appeared on the July 22 episode JTBC’s “Ask Us Anything,” where they candidly revealed many hilarious details about themselves.

During his introductory Q&A portion, Suho recalled an unforgettable memory he has with the members.

“Because I’m a good-natured leader, the members like to play a lot of pranks on me,” he started off. He then asked the “Ask Us Anything” cast to guess what was one of the more extreme pranks the rest of EXO played on him.

See Also: Baekhyun Discusses Who Has The Best Body In EXO And Why

After some hilarious guesses that including, “one of them stole your girlfriend,” and “they purposely left you behind,” Suho shared a few more hints, saying, “It happened at our waiting room, and while I was sleeping.”

In the end, Kang Ho Dong figured out the correct answer, and guessed that they had tied him down someone.

“I was getting a massage after our concert ended [in our waiting room], and while I was lying down, someone had taped me down. It was Sehun, Chanyeol, and Kai. Because I was held down, I couldn’t leave,” Suho explained.

Meanwhile, during the broadcast, Baekhyun also shared the interesting way he got closer to the members at the beginning.

EXO
Knowing Bros
Suho
How does this article make you feel?