Cre.Ker Entertainment’s Upcoming Group The Boyz Is Overwhelmingly Popular Even Before Debut

On July 22, the group held their first V Live broadcast with all 12 members.

The Boyz made their way to Blue Square in Hannam at 1 p.m. that day and were met with more than 1000 fans even though they had only prepared enough food for 200 fans. At 4 p.m. they moved to the U-Plex plaza in Sinchon and were surrounded by so many people that the event had to be halted due to safety concerns. 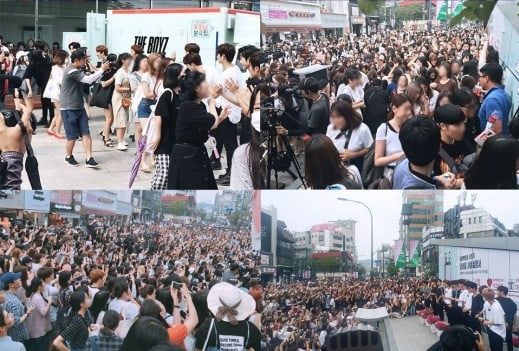 A source from the agency explained, “It was their first broadcast before their debut, and 50,000 viewers were connected. They received over 4 million ‘hearts’ and set an amazing record from the beginning. In line with our promise for 1 million hearts, we specially held an additional broadcast at 10 p.m.”