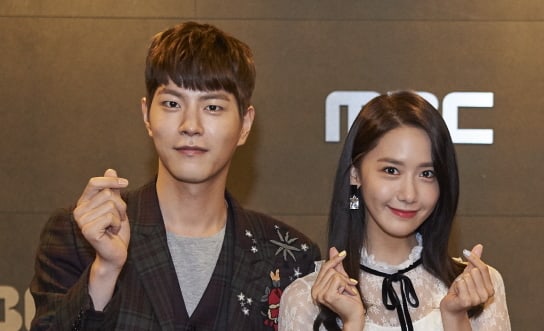 On July 24, during a broadcast through Naver V Live’s “X Early Interview,” the stars of MBC’s”The King Loves” sat down with Kim Tae Jin to discuss their work.

Girls’ Generation YoonA and Hong Jong Hyun carried a cardboard version of their fellow main co-star, Im Siwan, who recently enlisted in the army. As the interview began, the actors were excited to be on the broadcast, exclaiming “This place is great!”

The stars shared, “This is our first pre-produced drama, and now that we’re watching it after filmed it all, we feel like just viewers as well.” YoonA stated, “The drama will be fun all the way until the end,” to which Hong Jong Hyun added, “Even the villain has a story. The drama showcases all sorts of love.”

The actors then revealed the characters and the historical material for the reason they wanted to take part in “The King Loves.”

See Also: Im Siwan Says He Chose To Star In “The King Loves” Because Of YoonA

The actors also commented that they missed their co-star Im Siwan. “There is a huge empty space today because he couldn’t come with us,” they said.

In the end, Hong Jong Hyun made a promise with their viewers as well, saying that if they went over 15 percent, he would do a broadcast with Im Siwan.

Girls' Generation
Hong Jong Hyun
YoonA
The King Loves
How does this article make you feel?