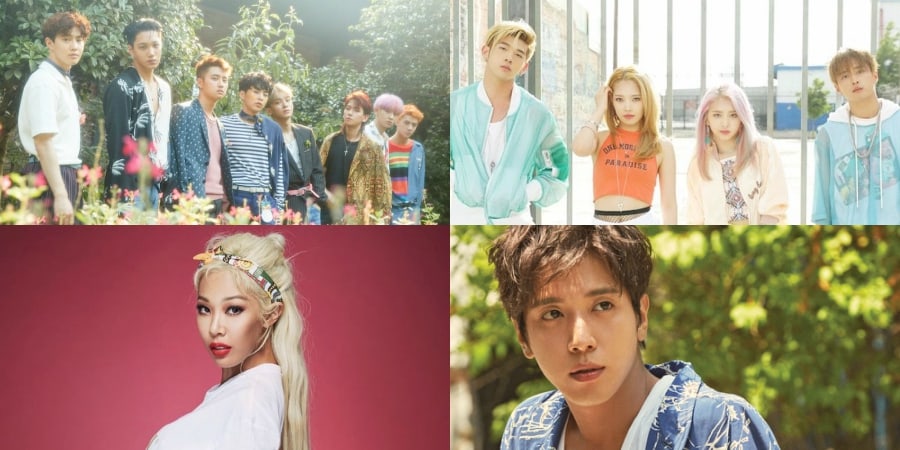 On July 25, Billboard released its latest weekly charts for the week ending in August 5.

EXO takes the No. 1 spot on the World Albums chart with “The War.” The group also showed their best performance yet this week on the Billboard 200 chart, and three of their new tracks have taken spots on the World Digital Song Sales chart.

KARD’s debut mini album “Hola Hola” has grabbed the No. 3 position on the World Albums chart, and also come in at No. 25 on the Heatseekers Albums chart. The co-ed group made their official debut with the mini album and its title track of the same name on July 19.

Coming in at No. 4 is Jessi’s new solo mini album “Un2verse,” which features her title track “Gucci,” and is the third K-pop album to make its debut on the chart this week.

G-Dragon’s “Kwon Ji Yong” remains on the chart for the seventh week, this time at No. 5. Red Velvet’s “The Red Summer” is at No. 10 after it debuted at No. 1 last week and meant that Red Velvet set a new record for girl groups. Zico’s “Television” comes in at No. 11 following its No. 3 position on last week’s chart.

Jung Yong Hwa’s mini album “Do Disturb” takes the No. 12 spot in its first week on the World Albums chart. The CNBLUE vocalist’s new solo mini album includes the title track “That Girl,” and was released on July 17.

In addition, BTS’s repackaged album “You Never Walk Alone” remains on the World Albums chart for its nineteenth week overall, taking the No. 13 spot this week. Meanwhile, the group remains at No. 1 on the Social 50 chart.