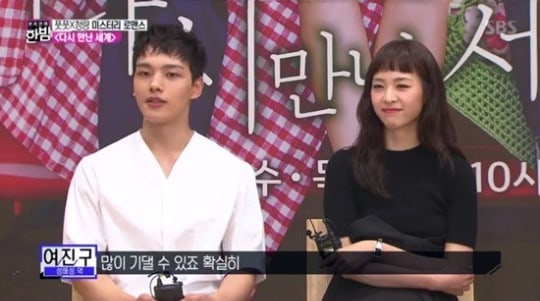 As co-stars of SBS’s “Into the New World,” Yeo Jin Goo and Lee Yeon Hee only had good things to say about each other during a recent interview.

For its July 25 broadcast, SBS’s “Night of Real Entertainment” sat down with the main cast of the drama, which also includes DIA’s Jung Chaeyeon and Ahn Jae Hyun as well.

When asked about Lee Yeon Hee, Yeo Jin Goo stated, “I can rely on her a lot. We converse a lot, and she is dependable.”

In return, the actress complimented him back, saying, “Even just by watching him, I become refreshed and my mood becomes better. I’m happy by just his presence itself.” While she may have been open with her compliments, Lee Yeon Hee hilariously then avoided the question about their age difference, and said, “Let’s not ask things like that.”

“Into the New World” premiered on July 19 as a follow-up to “Suspicious Partner,” and airs every Wednesday and Thursday at 10 p.m. KST.

Lee Yeon Hee
Yeo Jin Goo
Into the New World
E-news Exclusive
How does this article make you feel?