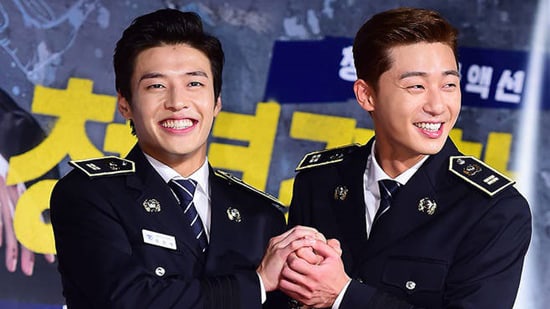 On July 26, it was confirmed that “Midnight Runners” co-stars Park Seo Joon and Kang Ha Neul will be appearing on an upcoming episode of SBS’s “Running Man.”

The two actors are currently promoting their new film and have displayed a great deal of chemistry and bromance in recent interviews. In the film, the two spend a lot of time running around as they get wrapped up in a kidnapping case, which is making fans look forward to seeing if they will replicate that same sort of energy in their episode of “Running Man.”

A source from SBS stated, “Park Seo Joon and Kang Ha Neul will be filming on July 31. An exact broadcast date for their episode has not been decided upon as of yet. It is currently slated to air sometime around mid-August.”

Meanwhile, Girls’ Generation has also been confirmed to be appearing in an upcoming episode of “Running Man” ahead of their 1o-year anniversary comeback.