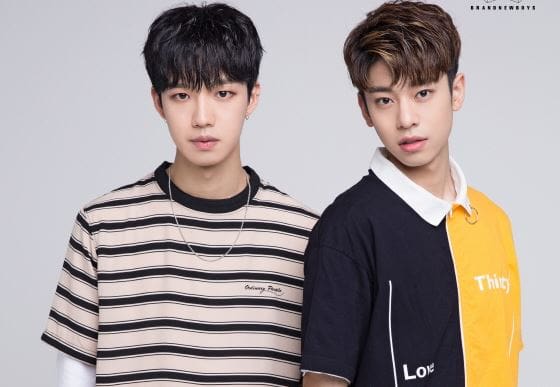 Lim Young Min and Kim Dong Hyun of Brand New Music’s new duo MXM recently participated in an interview and revealed who their role models are.

Both members explained that all Brand New Music artists are their role models, but they were asked to choose artists from outside their agency as well.

Lim Young Min said, “I really like Block B. Not only [do I like] their music style, but I also think it’s fascinating how each individual member’s different colors come together and balance out as a group. During the recording for tvN’s ‘Problematic Men,’ I told Park Kyung that I was a fan, but I couldn’t express it properly because I was so nervous. I wanted to take a picture with him, but I was so nervous that I couldn’t ask him for one. I want to go on the show again and tell him. Also, another role model I’ve had since I was little was Jay Park. I think it’s really cool that he can dance, sing, and produce music. I also think it’s amazing how he takes care of his artists as the CEO of AOMG, so I’ve been thinking, ‘I want to become like that.'”

Regarding his first variety show appearance through “Problematic Men,” he explained, “The day before the recording, I almost threw up. I like math, science, and logic, so when I received an offer to appear on the show, I was so happy that I wanted to jump up and down. Then I got ambitious and tried to prepare everything I could, and I got so nervous that I could only sleep an hour the night before. At the recording, they made the atmosphere very comfortable, so my nervousness was gone half way through. I regret not having been able to speak properly, but it was fun. I asked the PD to invite me to the show again, saying that I can do better.”

On the other hand, Kim Dong Hyun chose Park Hyo Shin and Im Siwan as his role models. He said, “Musically, Park Hyo Shin. Ever since I started singing, I wanted to take after him and practiced while watching him. He continuously strives for improvement, he changed his singing style, and he appears in musicals. Seeing the way he works hard in various ways made me think that I should learn from him. Another role model of mine is ZE:A’s Im Siwan. He properly plays his role as a team member, and he was also acknowledged as an actor. I think he’s very amazing, so I want to become like him. I also want to try acting if I’m given the chance.”

Kim Dong Hyun is an extremely common name in Korea, which means it may be better for him to have a stage name. He commented, “I don’t think I’ll use a stage name while I’m promoting as MXM. When we come out as a full group, I think I’ll use one. But if I do end up using one, I want to have a Korean name instead of one in another language. There are lots of pretty names in Korean as well. I like nice names like Baekhyun (EXO), and my name also has the character ‘Hyun,’ so I want to make a similarly nice name.”