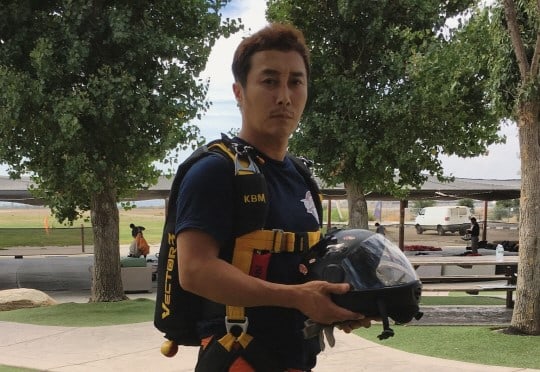 Surgery, hospital, and emergency room are not words people usually associate with Kim Byung Man. Afterall, the 160-centimeter (approximately 5 feet 2 inches) tall comedian and stuntman has eight black belts for various martial arts and has even tried his hand at figure skating!

Earlier this month, Kim Byung Man received surgery in the United States for a spinal fracture injury which he sustained in a skying diving accident. The comedian was participating in a training exercise to receive a skydiving license for the upcoming Korean International Skydiving Competition. The accident was caused by a sudden change in wind direction as Kim Byung Man was landing. Thankfully, Kim Byung Man prevented further injury as he bent his legs the moment of impact, a skill acquired in his years of martial arts training.

Kim Byung Man opened up about the incident, saying, “To put it simply, the injury was equivalent to having jumped off a four-story building. Thankfully the ground was a bit muddy. If it had been concrete, I would have died instantly. It was really my fault since I still jumped even though I wasn’t confident about using the replacement parachute.”

Like an expert, Kim Byung Man’s immediate response after the accident was very fast. He stood up on two feet, even though he could hardly breathe because of the pain. “I have a compressed fracture on my second vertebrae. Since the bone was completely shattered, it was replaced with a titanium bone. Now it would be nice if people called me Iron Man!” Kim Byung Man stated with a laugh. “Since I don’t have any visible wounds, people might think that I’m alright. But I had to have a 10cm (approximately 4 inche) incision in my side from the surgery. The doctors here (in the United States) were shocked. When they saw me up and walking around two days after the surgery and that I had removed the urination tube and was walking myself to the bathroom, they all laughed and asked what I kind of person I was!” 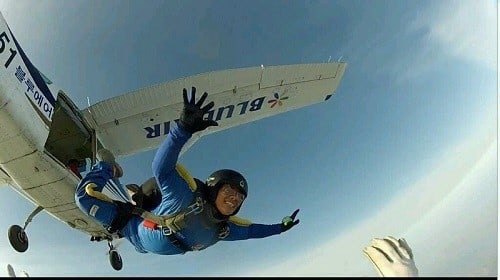 Kim Byung Man has been passionate about skydiving for a long time. In 2013 he received skydiving lessons and graduated from the Seoul Skydiving School. That same year he successfully participated in the “Law of the Jungle in the Caribbean’s” Great Blue Hole Skydiving challenge, and also received his coaching license after training both in America and South Korea. After completing 520 dives, Kim Byung Man can now skydive with regular people strapped to himself. This accident took place as Kim Byung Man was in the process of joining the national skydiving team.

As a regular member of variety shows such as “Law of the Jungle” and “Clench Your Fist and Blow the Boat Horn,” why would he be interested in skydiving? Kim Byung Man has responded to reporters who ask this question by saying, “I feel like I’m alive. I’ve felt that while I am flying through the sky. Don’t we all smile when we eat red peppers? Because we know that taste, we go and eat those red peppers. Even as we furrow our brows and become covered in sweat. That taste [of skydiving] is always challenging me, making me sweat, and take that risk.” 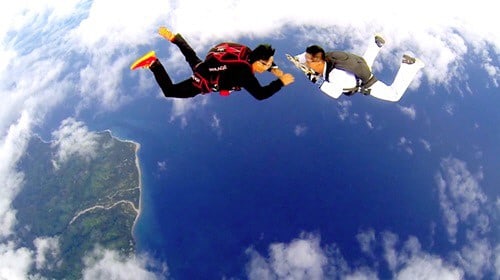 Kim Byung Man currently returned to Korea where he will be recuperating in a hospital for the next few months. He has stated that he plans to return to skydiving “the second his bones fuse back together.” The comedian continued, “Others who do skydiving, climb high mountains, or other extreme sports say that we must treat our bodies preciously. However, since I skydive, I have ended up truly treating my body preciously. If I don’t treat it that way while I am in the sky, I could die. I don’t recommend skydiving to others at first, however, I tell them that if they truly take care of their safety, there are great results in the experience. Instead of those people who show off flashy techniques up in the sky, I think the truly talented skydivers are those who avoid long term injuries. At every second, you must prioritize your safety, and, as you begin to be concerned about the safety of others, the idea that ‘safety is best’ becomes second nature even when you are living your daily life and not skydiving. I have begun to concern myself with others safety and not just my own.” 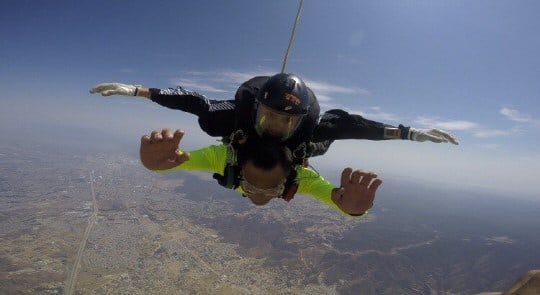 Kim Byung Man wrapped up his sentiments on skydiving by saying, “The amazing thing about having completed 520 dives is that all the impure thoughts, prides, prejudices, and selfish or hateful thoughts completely disappear. The sky does that to a person. It is a place where bad thoughts are erased. Right after the injury, British special forces came to rescue me. While I was being taken to the hospital, I said ‘I should have fallen farther. Then I wouldn’t have been able to feel pain.’ After the interpreter translated what I’d said, the special forces smiled and said, ‘Even if you keep skydiving you won’t have any problems.'”

We’re glad to see Kim Byung Man recovering and hope to see him back to normal soon!

Kim Byung Man
How does this article make you feel?