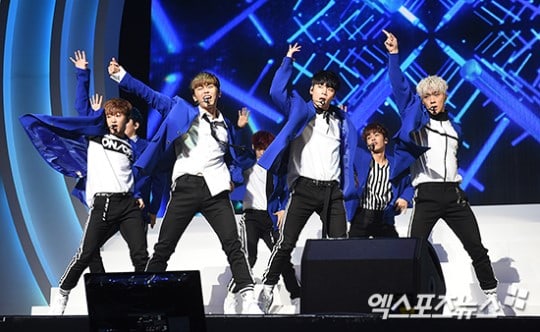 ONF Members Talk About Training With BTS And At JYP

The members talked about their trainee pasts and their hopes for the future. Japanese member U said, “I was a JYP trainee in the past. I was supposed to take an exam at my Japanese high school, but I gave up everything and came to Korea. It didn’t work out well. It went through a difficult time and wanted to quit, but my family and friends helped me.”

U further shared, “I worked as a part-timer at a Korean pork belly restaurant and I learned Korean while earning money. With that money I took lessons, auditioned, and now I am debuting. I’m happy.”

Youngest member Laun said, “I trained with BTS members when I was 14. I was lacking in various aspects, so I couldn’t debut with them. However, seeing BTS allowed me to dream bigger. I’m still a fan of BTS.”

Hyojin added, “BTS is really popular and we would also like to communicate well with our fans.”

Member MK also appeared as a contestant on Mnet reality show “No Mercy” which determined the members of MONSTA X.

BTS
XPN
ONF
How does this article make you feel?