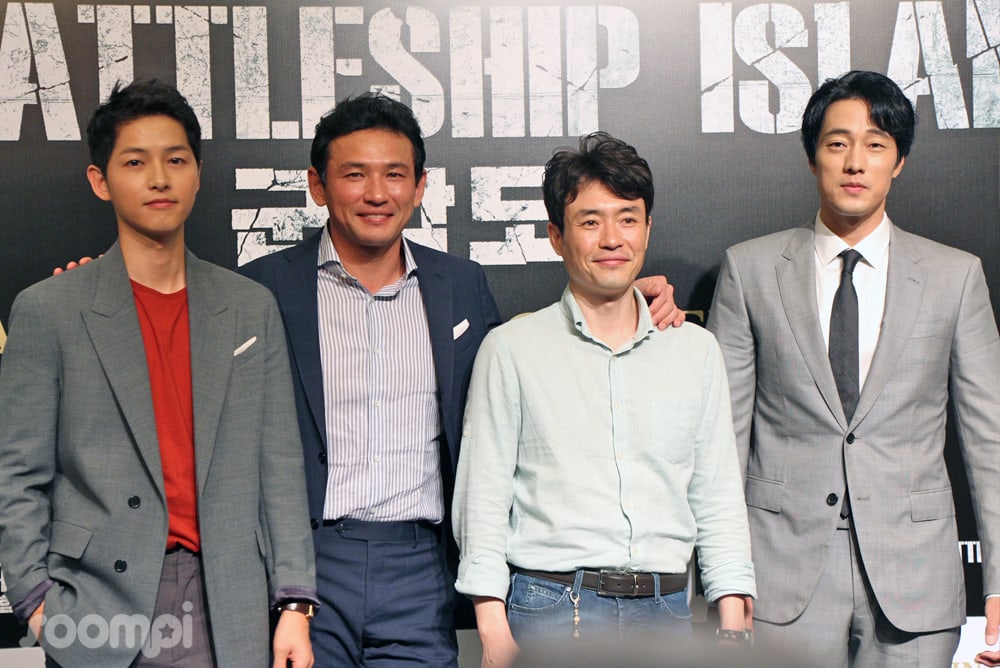 The team behind the latest blockbuster movie from South Korea, “The Battleship Island,” including director Ryoo Seung Wan and cast members Hwang Jung Min, So Ji Sub, and Song Joong Ki, were in Singapore on August 8 as the first stop of their promotional tour. Besides meeting members of the press, the four gentlemen also held a Meet and Greet session with fans and attended the Gala Premiere during their whirlwind trip.

At the press conference, when asked who would have the best survival skills in times of war, the two senior actors Hwang Jung Min and So Ji Sub were unanimous in their answers, agreeing that Song Joong Ki will survive easily. “I think everyone here except Joong Ki will experience pain if we have to perform aggressive movements,” Hwang Jung Min said, causing his co-stars to burst into laughter. So Ji Sub added, “He also got out of the army not too long ago so it has to be Joong Ki.” To this, Song Joong Ki replied “I’m the youngest so I also think it will be me.” 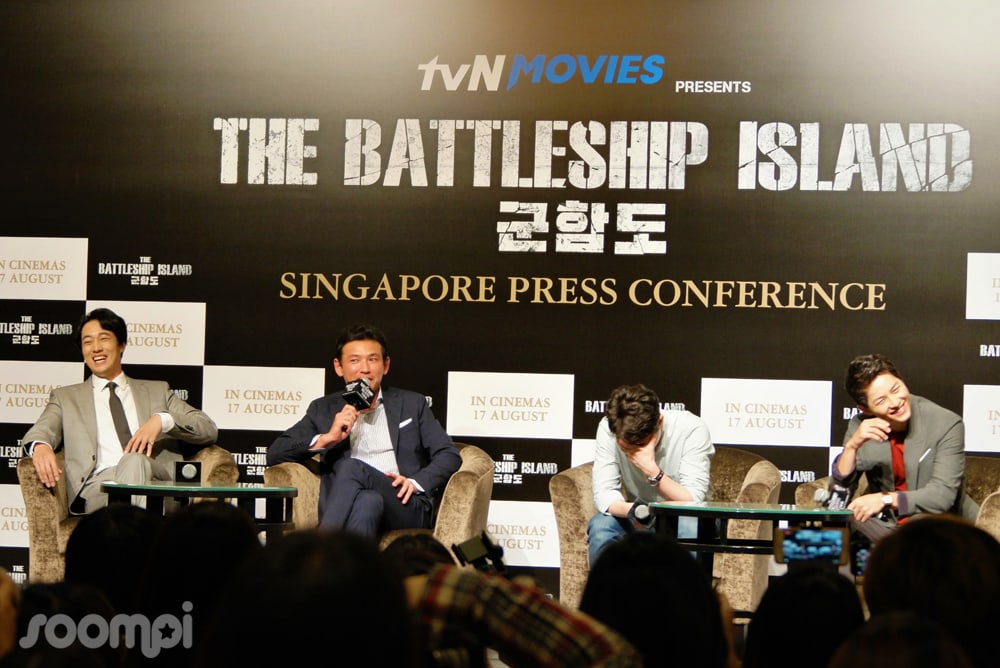 In the first action scene of the movie at a public bath, So Ji Sub, who plays a former gangster from Seoul, appeared almost fully bare. The actor admitted it took him a long time to train and prepare himself for that scene. 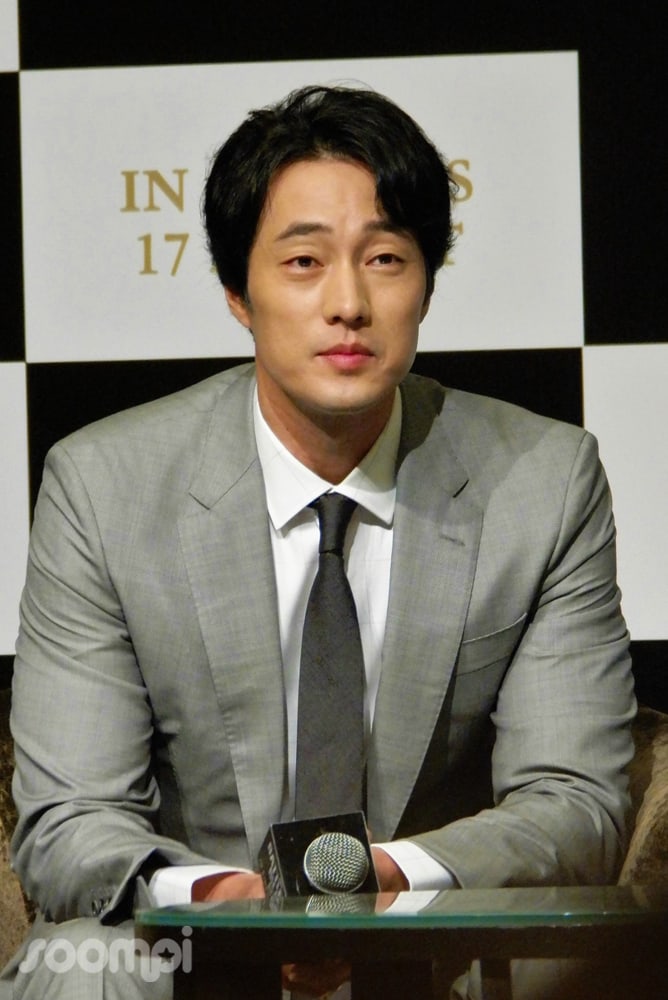 Song Joong Ki, who plays a special agent in the movie, joked, “I feel like I have lived five years as a soldier if you count the the number of years I’d served as a soldier in Korea and the roles I had played in ‘Descendants of the Sun‘ and this movie.” 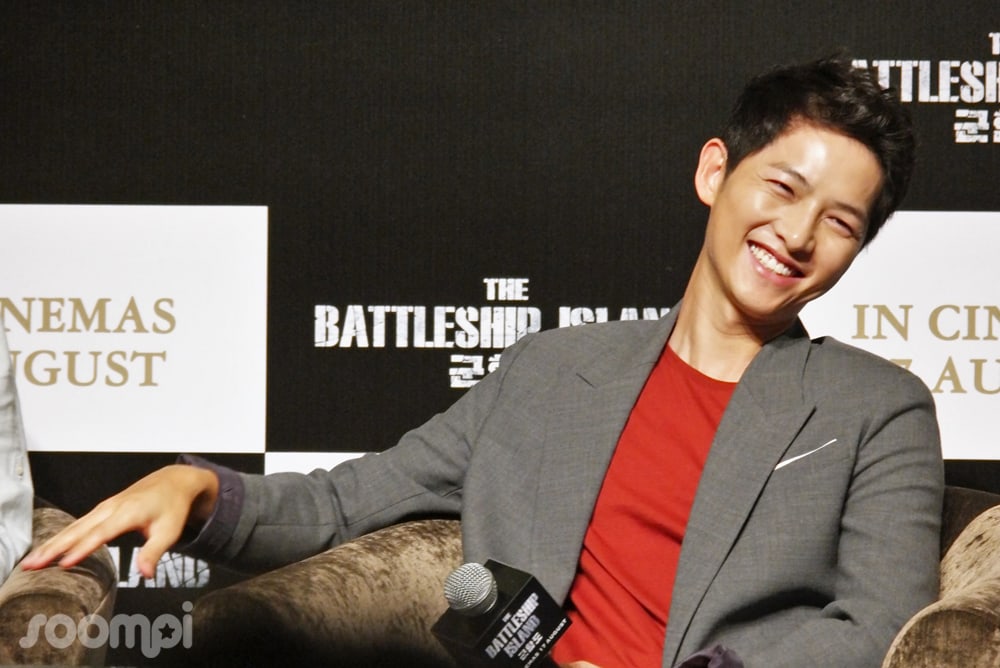 Despite being the youngest male actor among the leads, Song Joong Ki said he didn’t feel any pressure and was very comfortable on the set, with his seniors taking care of him very well. The chemistry between them was great, and they gave him a lot of advice.

When asked if there’s any possibility for him to work with his fiancé – Song Hye Kyo – again, Song-Song couple fans may be disappointed to hear that an onscreen reunion is unlikely. 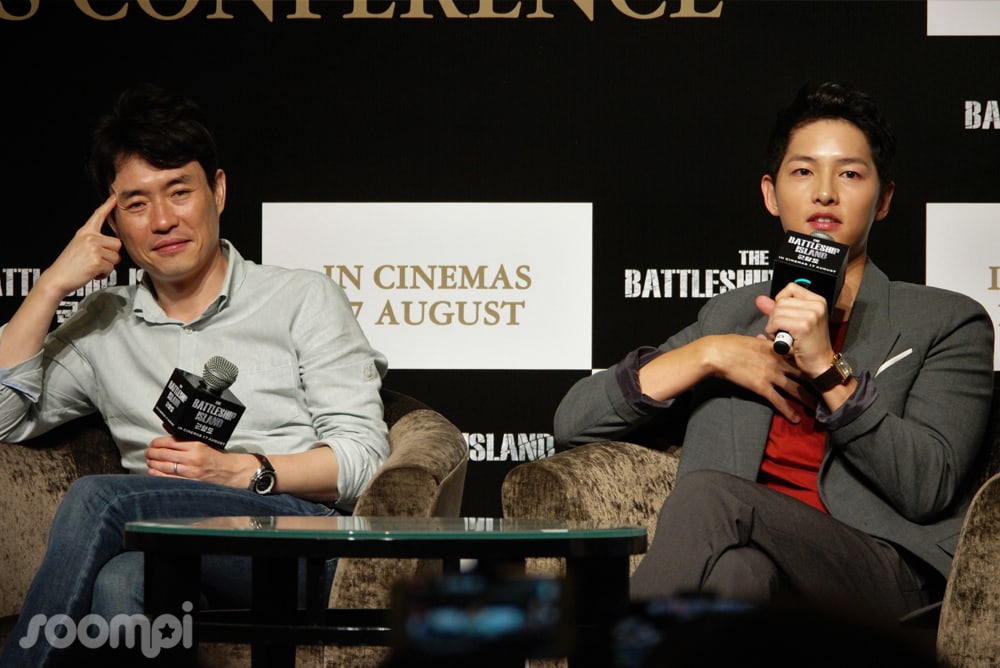 “Working with her in the same production is something I would have to give a little more thought to. It will be challenging because work is work after all,” Song Joong Ki explained.

Describing the talent of his co-stars, Hwang Jung Min said, “So Ji Sub’s acting is very solid and gentle; he reminds me of someone who is very responsible and reliable. Whereas for Song Joong Ki, he’s very considerate, and working besides him, I felt that his parents had raised him really well.” 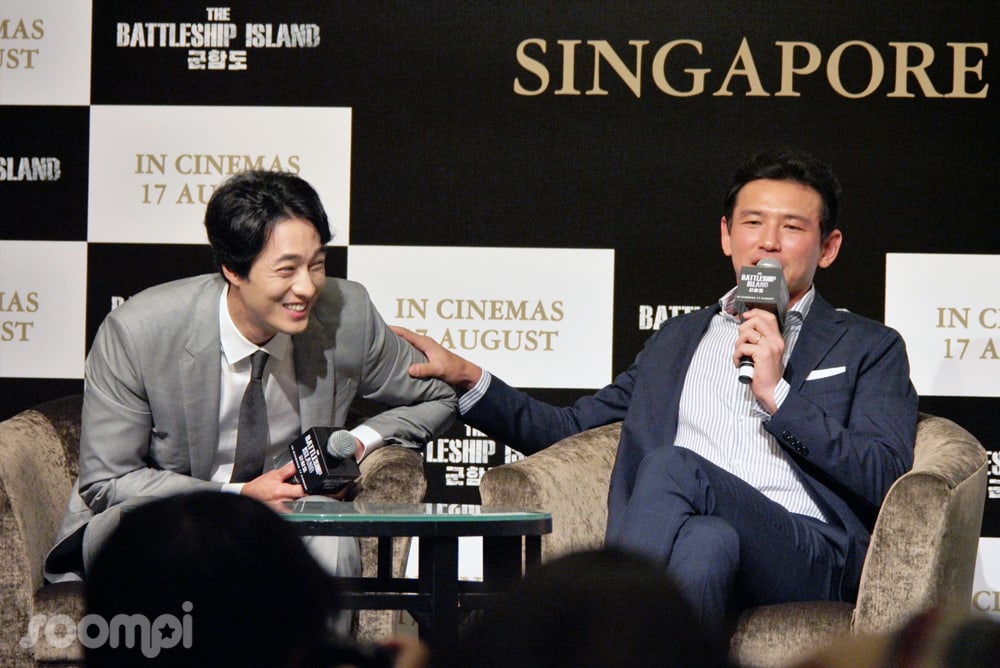 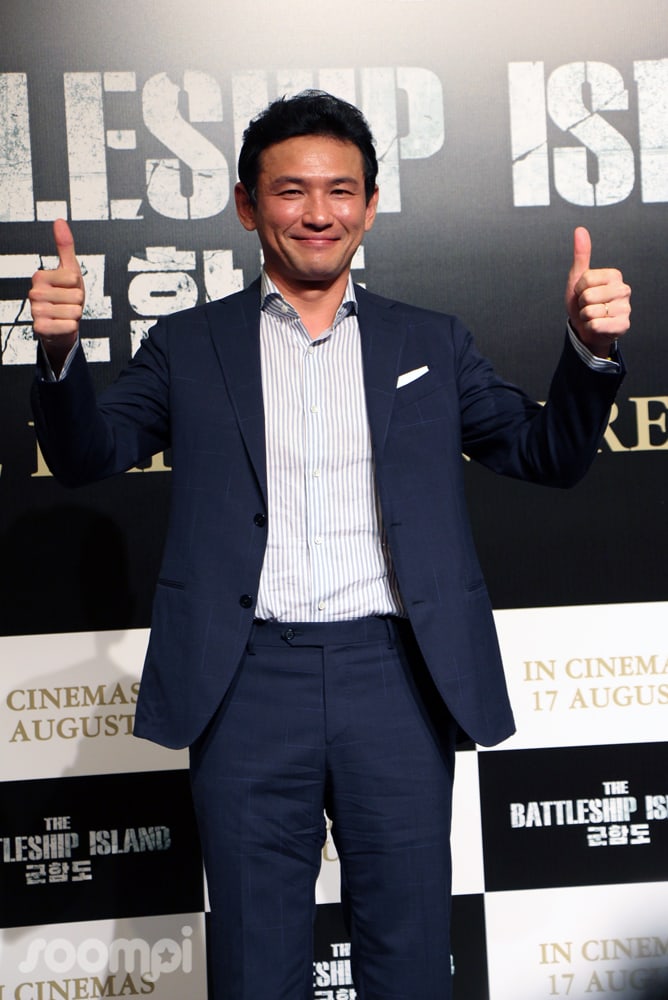 About 5,000 fans turned up to meet the actors at the Meet and Greet event at Suntec City later that day. Later, “The Battleship Island” cast ended their Singapore tour with a Gala Premiere held at the MasterCard Theatres at Marina Bay Sands.

The movie opens in Singapore on August 17. 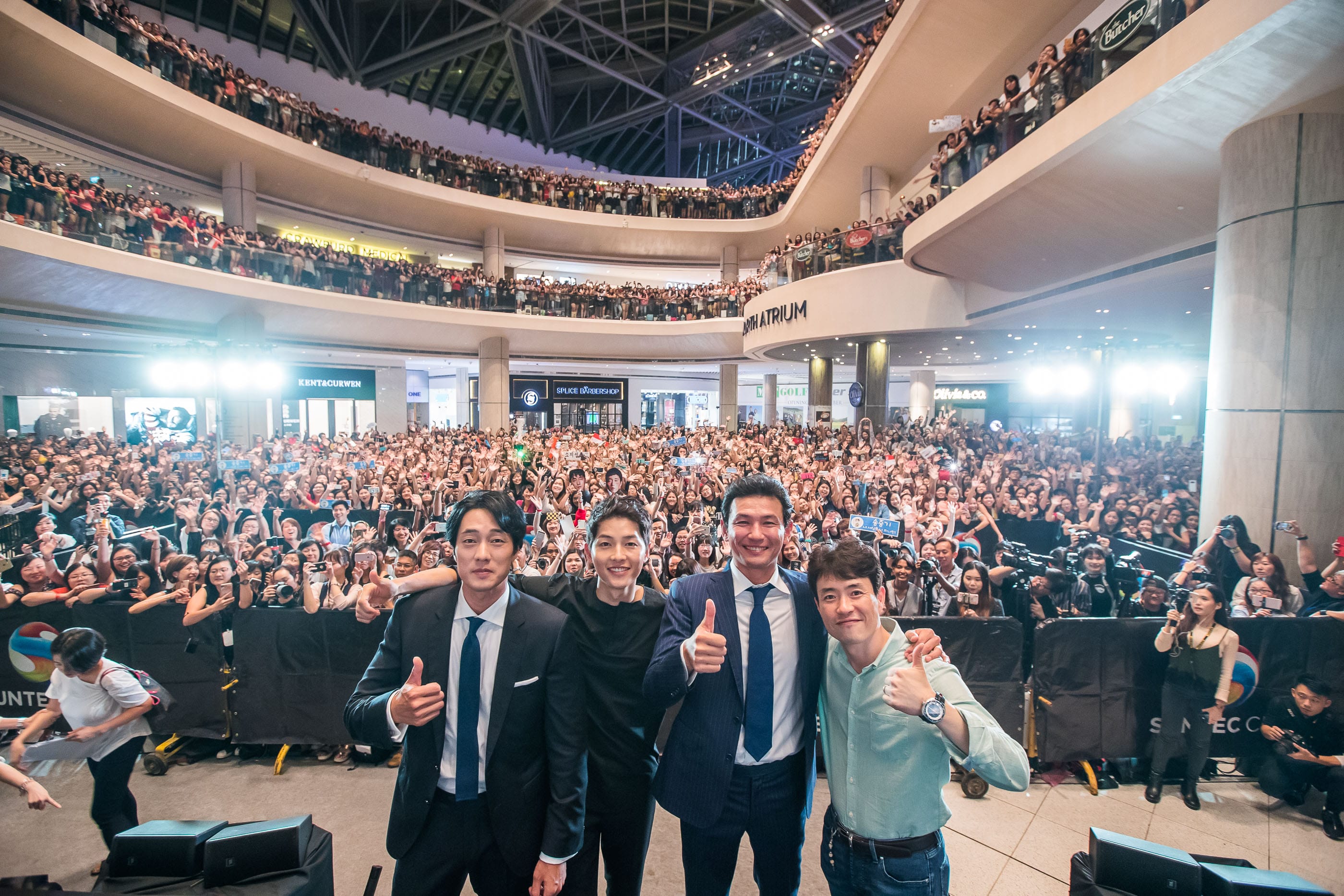 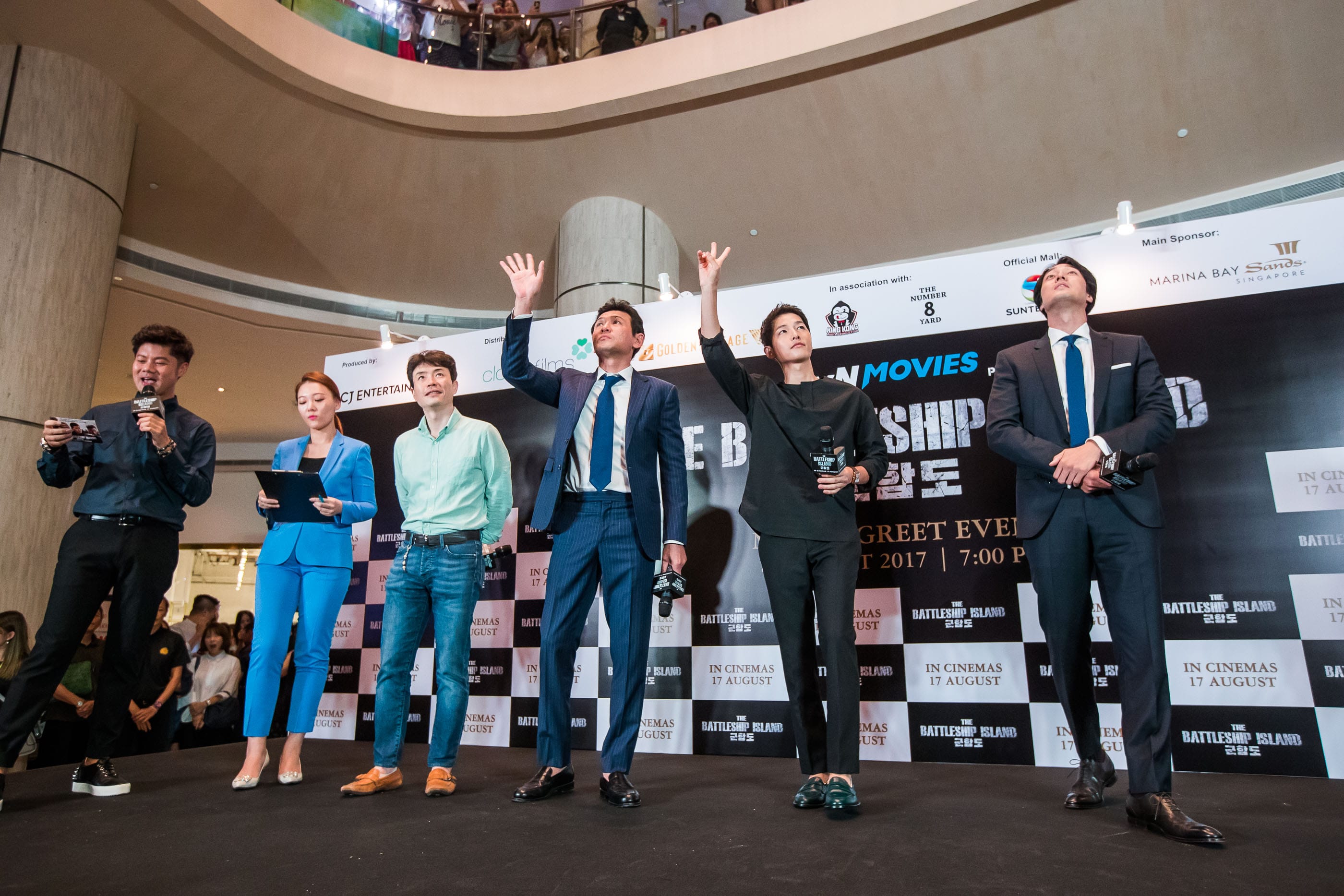 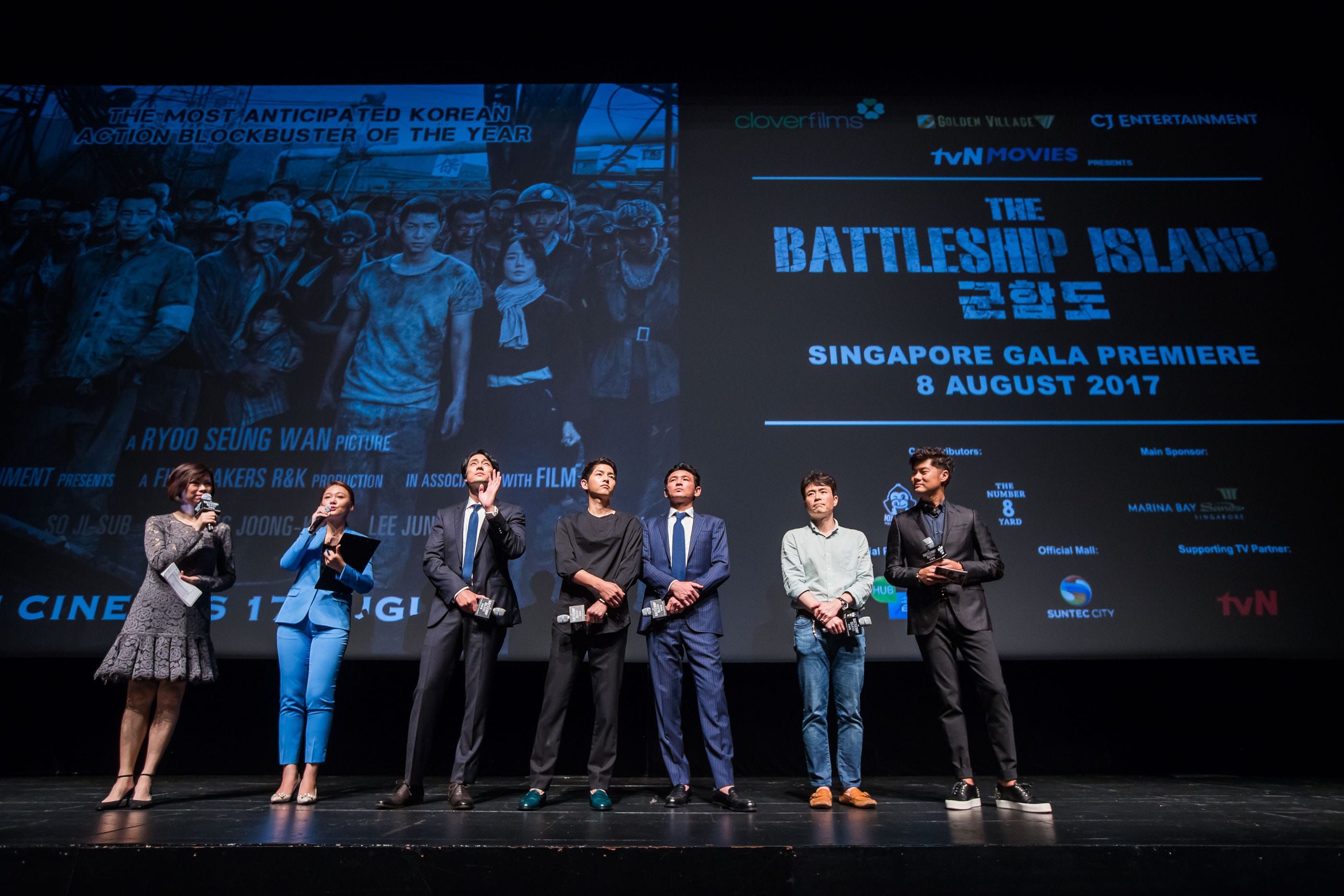 Special thanks to Golden Village Pictures for inviting Soompi to the press conference.

All non-watermarked images are courtesy of Golden Village Pictures.

Song Joong Ki
Hwang Jung Min
So Ji Sub
The Battleship Island
How does this article make you feel?