Upon its recent release, the film already impressively sold over 6 million tickets in Korea alone. This obviously has a lot to do with the cast and story, but it also has to do with director Ryu Seung Wan, who directed the hit movie “Veteran” as well. He worked especially hard to bring this important part of history to life.

Curious to know more about the movie? Keep reading to find out.

This film is based on historical events that happened during the Japanese colonization, where 400 Koreans were assigned to work as forced laborers on a remote island called Hashima Island. Hwang Jung Min plays Lee Kang Ok, the leader of a band with a daughter named So Hee (played by Kim Soo Ahn). He mistakenly gets put on the ship that is taking all the forced laborers to the island. On this ship, there is a well-known gangster by the name of Choi Chil Sung (So Ji Sub) and a slave named Mal Nyeon (Lee Jung Hyun). All of these characters get to the island and are forced to be conscripted laborers in a coal mine. They face various challenges from the Japanese, who are running the island. Song Joong Ki also stars in the film as Park Moo Young, a freedom fighter who gets sent to the island a bit later on in the film. He gets tasked with a mission to rescue one of the members of the Korean Independence Movement and is to rescue him alone. 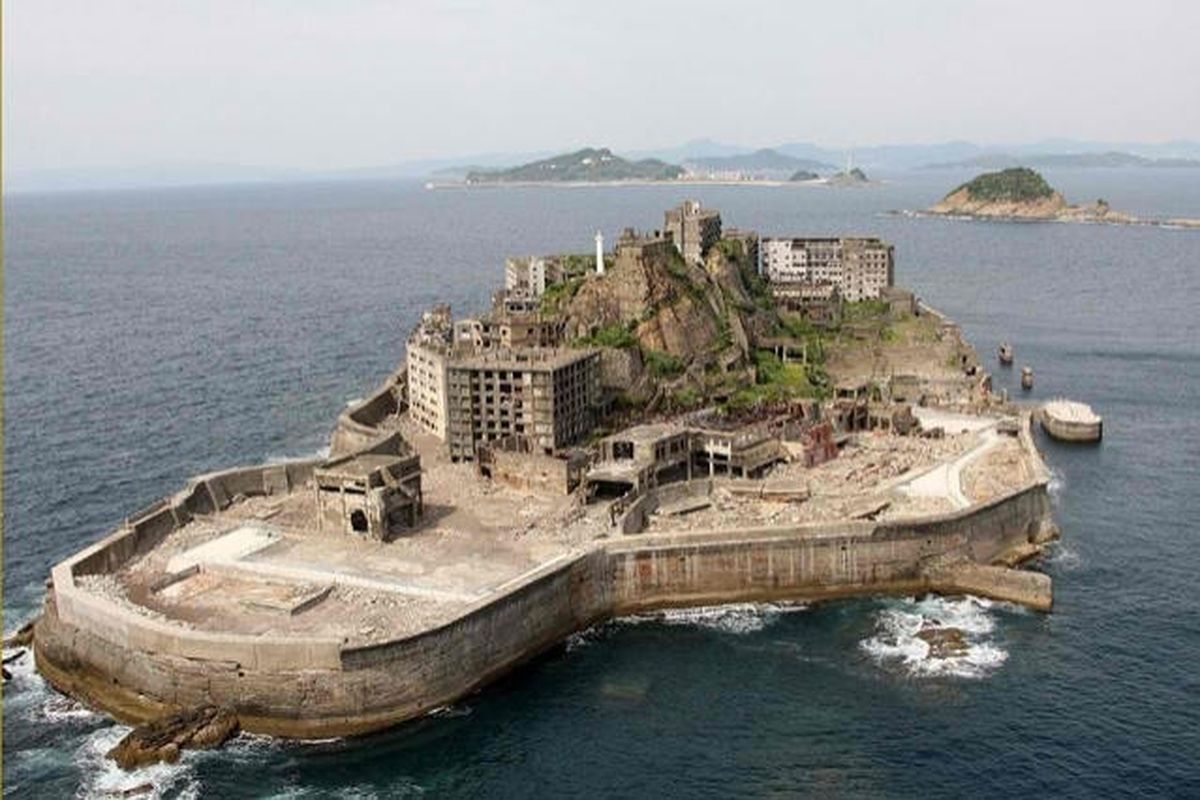 Here is an actual picture of Hashima Island.

The most memorable part of the plot is the father-daughter relationship between Lee Kang Ok and So Hee. The ability for the father to keep the harsh reality of the situation at bay from his daughter is heart-breaking to watch. He tries his best to put his daughter’s safety and best interests first and, during this horrible war, their love for each other is the silver lining. These two should win all kinds of awards because they will have you swimming in some heavy emotions by the end of the flick.

Despite this affectionate father-daughter storyline, the overall feel and tone of the flick was rather disturbing and hard to watch at times. The film starts with a bang, exposing all the excruciatingly abhorrent conditions and situations that the Korean conscripted laborers had to endure. It serves as yet another reminder of the harsh conditions of war, specifically at this period in history during the Japanese colonization.

The brutality and harsh conditions of the Korean people were definitely present in the film and just when I thought it wouldn’t get any more grotesque, it did, which sometimes made it difficult to get through. The film later shifted gears a bit towards Song Joong Ki’s character and, while it felt a bit disheveled, it was definitely well executed.

The story also felt a bit inconsistent at times in the sense that my emotions went all over the place. I couldn’t really get attached to any of the characters except for Hwang Jung Min’s character and his daughter. This was probably because there was a lack of character development (but more about that later).

Hwang Jung Min plays Lee Kang Ok, the positive and hardworking father of So Hee who is also the leader of a band. Although there was a lot of hype surrounding So Ji Sub and Song Joong Ki, Hwang Jung Min is definitely the main character. The story surrounds his ability to adapt to the unfortunate circumstances that he and his daughter are put in. He becomes well-liked by the Japanese as he can play music and entertain them during parties and dinners.

I really didn’t expect anything short of perfection in terms of Hwang Jung Min’s acting capabilities. He’s earned the title as being one of the best actors in Korea and he really never fails to put his emotions out there no matter what role he takes on. Hwang Jung Min really suited the role of Lee Kang Ok and it was crazy to see his ability to portray such a wide range of emotions! 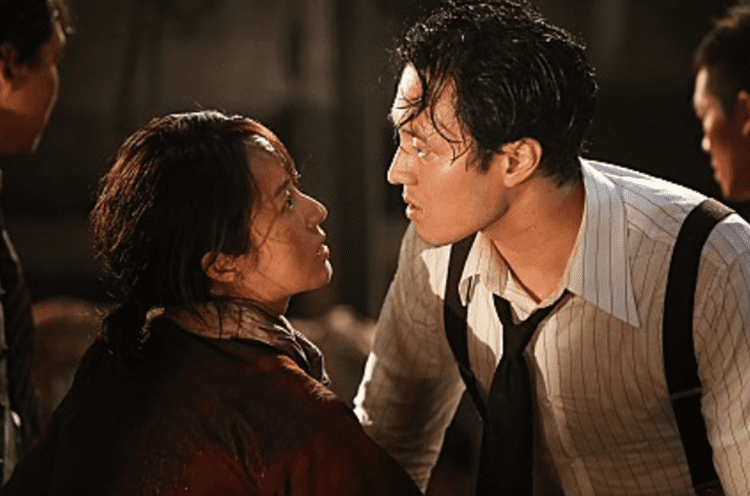 So Ji Sub as Choi Chil Sung was what I expected. When I discovered that he’d be playing a gangster, I thought it was similar to a lot of roles that he’s played in the past. Was I blown away by his performance? No. But, he did do a good job of being that tough, bad-ass man who doesn’t take crap from anyone. And his subtle romantic gestures towards Mal Nyeon proved to provide a sort of nice break from the intensity of the flick.

So I was a bit disappointed that it took almost 40 minutes for Song Joong Ki to appear on screen, but it was totally worth the wait when he actually appeared:

Totally worth it, right?

I was worried he wouldn’t have a very dominant role in the movie, but the story did revolve around him quite a bit after he first appeared, which I was completely satisfied with.

Song Joong Ki plays Park Moo Young, a member of the Korean Independence Movement who is sent to Hashima Island to retrieve one of the members of the group. He plays a ruthless freedom fighter who is initially quite hard to warm up to. It’s definitely far from the other characters we’re used to seeing him in (and swooning over) and maybe it’s because of the lack of history and build up of his character. Sadly, it takes most of the movie to actually start to really like him, but when he does start to become appealing, we obviously can’t help but swoon.

Lastly, I can’t forget to mention this ball of sunshine, Kim Soo Ahn. You might remember her from the movie, “Train To Busan.” 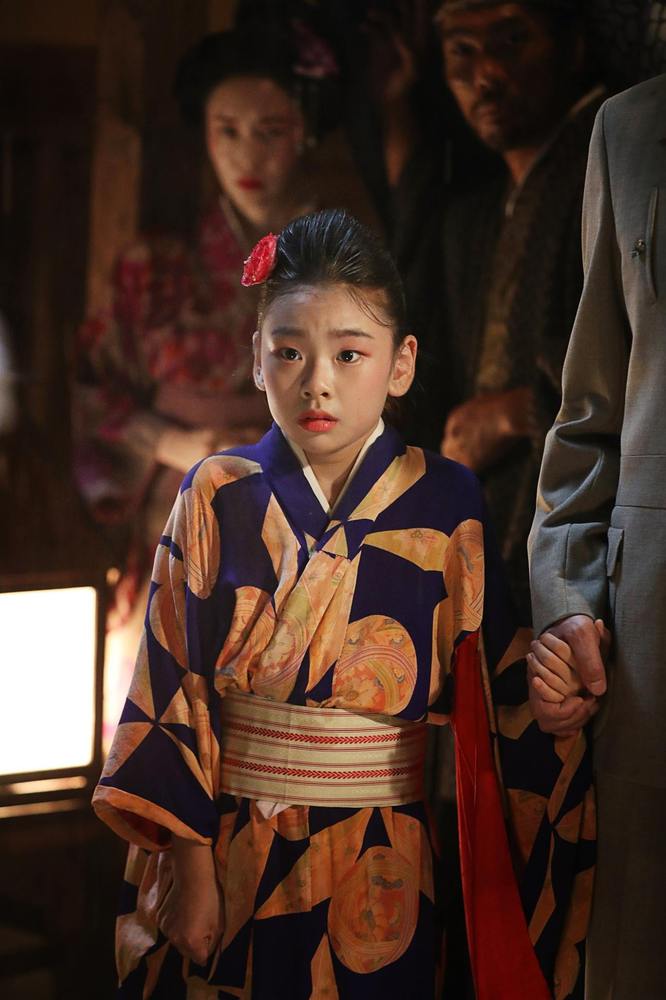 Kim Soo Ahn as So Hee seriously stole the show. I couldn’t help but be taken aback by how good she is in this movie. She was able to make me feel sad and hopeful in a matter of seconds just by her facial expressions. I also loved the brief interactions with her and Song Joong Ki – they were too cute.

The first 30 minutes of the movie were especially tough to watch because it was a reminder of how the Koreans were treated during the Japanese rule. I obviously can’t look past the fact that Ryu Seung Wan wrote and directed it, because this fact alone made the film watchable. He did an excellent job of delivering and producing the film.

The film has been getting a lot of slack for its over-sensationalization of the story, which I could totally see, but I think it just bothered me more that I found it difficult to get past the disturbing and gory scenes. I couldn’t focus on the character development and story of the film as much. Needless to say, I couldn’t help but still feel sad after the movie ended and wanted to crawl into a hole.

These sad feelings aside, Ryu Seung Wan had an important story to tell and it was necessary for people to be aware of it. I had briefly known about the history of it, but didn’t realize how harsh it was. I’m thankful that it’s out there and that people can be informed.

If you’re looking for a film with some great acting and if you’re a fan of any of the actors mentioned above, then you should watch it. With such a star-studded cast, you really can’t go wrong, especially since you’re able to see these two actors on the same screen.

The talent, the chemistry!

Soompiers, have you seen “The Battleship Island”? What did you like about the film?

Soompi Spotlight
The Battleship Island
How does this article make you feel?