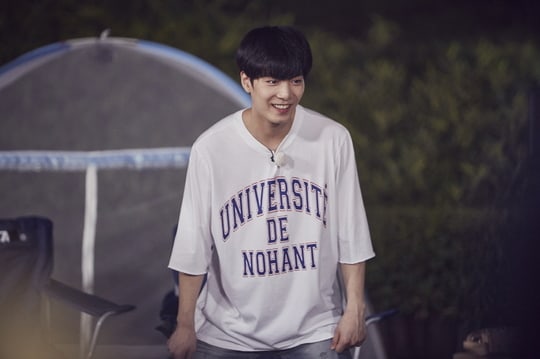 On the August 13 episode of JTBC’s variety show “Night Goblin,” NU’EST’s JR showed us his clumsy side.

NU’EST’s JR joined the “Night Goblin” cast in their quest to be the first in line for a famous water slide at a well known water park in Yongin. As in each “Night Goblin” episode, the cast was to camp out overnight at the popular location to beat out the hoards of attendees who would inevitably pack the spot the next day.

To pass the time, the group decided to practice a bit of soccer and commenced a foot volley. JR clumsily struggled to control his contact with the ball and sent it all over the campsite. Just as he announced he was getting the hang of the game, he knocked the ball straight into his face, sending the entire cast into a fit of laughter.

Next, the group attempted heading practice. Here, JR continued to struggle controlling the ball as the other cast members attempted to teach him how to properly do a header. This continued until JR’s headers became so wild that he took out a camera!

As the group waited for the “Time Fairies,” who this week were played by MAMAMOO’s Solar and Wheein, they decided to change into their swimming trunks. Throughout this scene, JR struggled just to stay on his feet as he tripped over his chair multiple times. Poor guy!