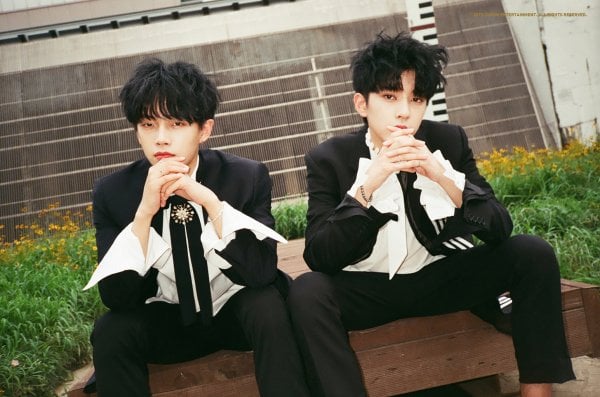 Kim Yong Guk revealed how he felt about making his debut not long after “Produce 101 Season 2” was over. He said, “My sadness about getting eliminated from ‘Produce 101 Season 2’ was resolved for the most part through our promotions, but it’s still there. I actually thought I wouldn’t be able to debut because I got eliminated. I’m happy that I got to perform on stage again so soon.”

He also shared, “It was amazing to see in real life the celebrities and friends I’d only seen through TV. We recently filmed a video with GFRIEND, and that was really cool.”

The “M!Countdown” broadcast scheduled for the day of the interview featured appearances by Wanna One, Yoo Hoe Seung’s band N.Flying, Noh Tae Hyun’s group HOTSHOT, and Samuel Kim, all of whom are from “Produce 101 Season 2.”

Kim Yong Guk commented, “It was cool and unexpected that I’d get to see my friends from ‘Produce 101 Season 2’ at a broadcasting company. I just talked to Yoo Hoe Seung a while ago. We had competed on ‘Produce,’ and I hate that we have to compete again. I cheer them on, but I also want my team to do well.”

They then expressed their surprise and joy at the news that they had sold more than 20,000 albums through their short promotions. They thanked their fans and shared that they want to promote for a longer time next time around.

Now, Kim Yong Guk will join JBJ in their debut preparations, while Kim Shi Hyun will return to being a trainee and continue to practice for a boy group debut next year. Kim Shi Hyun said, “I will practice hard until Kim Yong Guk returns from his JBJ promotions and build my skills so that we can continue on together.”

Watch Longguo & Shihyun play the bromance game in an exclusive interview with Soompi!