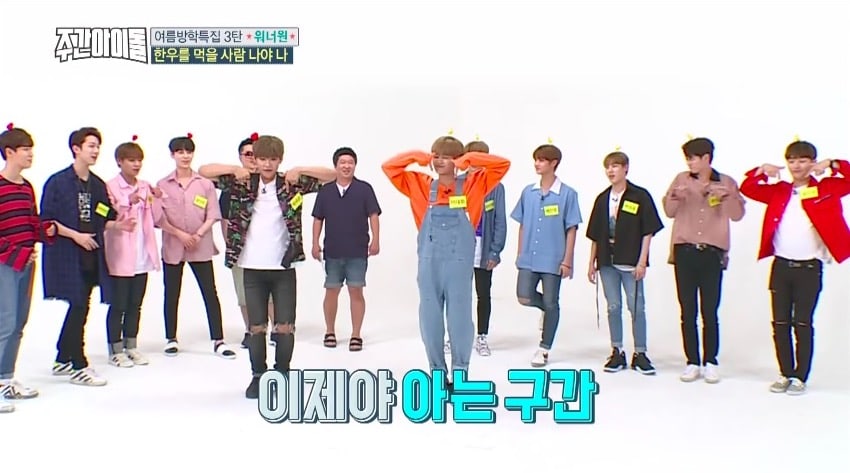 Wanna One took on a dance battle challenge on “Weekly Idol,” with the guys showing just how well they know the choreography of some of K-pop’s biggest recent hits!

August 16’s episode of MBC every1’s “Weekly Idol” was the second episode to feature Wanna One as guests.

During the show, they were divided into two teams based on their dorm roommates, with the five-member “big room” team versus the two trios that combined to form the “little room” team.

The guys guessed that Lee Dae Hwi would be the best representative for the “little room” team in their cover dance battle, while they named Park Woo Jin and Park Ji Hoon for the “big room” team.

With hosts Defconn and Jung Hyung Don judging the game and the prize of Korean beef on the line, the dance battle began! The guys had fun dancing to hits like BTS’s “Blood, Sweat & Tears,” WINNER’s “Really Really,” BIGBANG’s “BANG BANG BANG,” and I.O.I’s “Very Very Very” together.

When BLACKPINK’s “As If It’s Your Last” came on, the Brand New Music duo Park Woo Jin and Lee Dae Hwi started to get hilariously competitive as they put their all into the moves. Yoon Ji Sung also stole the show during GFRIEND’s “Me Gustas Tu.” 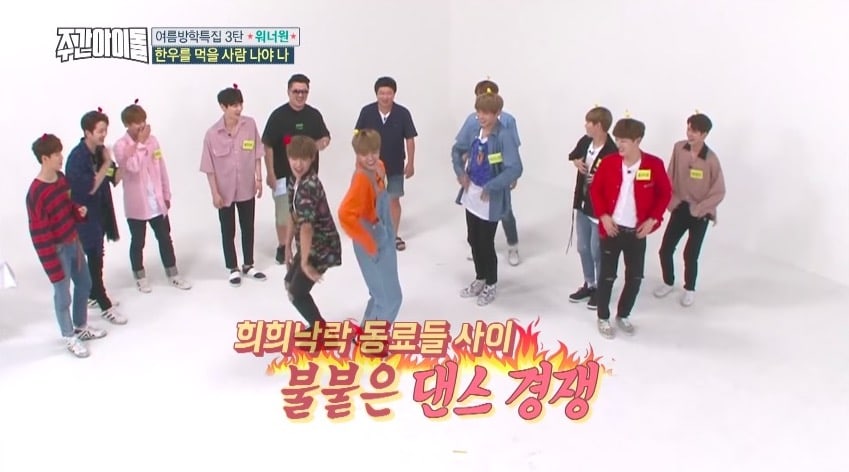 When the song switched to TWICE’s “Signal,” Lee Dae Hwi ran out to the center and said “I love you, TWICE!” as he pulled off the moves perfectly, with his teammates Kang Daniel and Bae Jin Young joining in.

After the whole group’s grand finale of I.O.I’s “Pick Me,” the hosts commented that Park Woo Jin and Lee Dae Hwi had done a great job representing their teams. They jokingly asked Lee Dae Hwi if he’d been training to debut in a girl group.

“It’s because I trained with TWICE,” he explained, and Park Woo Jin said with a laugh that he’d learned from Lee Dae Hwi.

Watch the hilarious battle below.

Afterwards, the hosts decided that the “little room” team was the winner of the round.

Meanwhile, Wanna One won their first ever music show trophy on “Show Champion” on August 16 with their debut track “Energetic.”