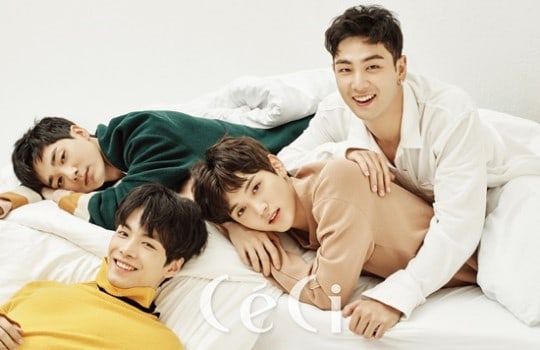 During the interview portion, the group was asked what their happiest moment was. The leader of the group JR replied, “Everything feels great recently. But what makes me happiest is that 10,000 seats to our fan meet sold out in three minutes.”

They are earning a huge amount of popularity for the first time since their debut six years ago. JR commented, “We ourselves have not changed. Even before, every moment was important for us. Going forward, we’re going to work hard.” Aron and Ren said that winning first place at a music program is something they really want to achieve this year.

Meanwhile, NU’EST W are looking forward to a fan meet on August 26 and 27 at Korea University’s Hwajung Gymnasium. You can find the full interview and pictorial through the September issue of CeCi.

CeCi
NU'EST W
How does this article make you feel?