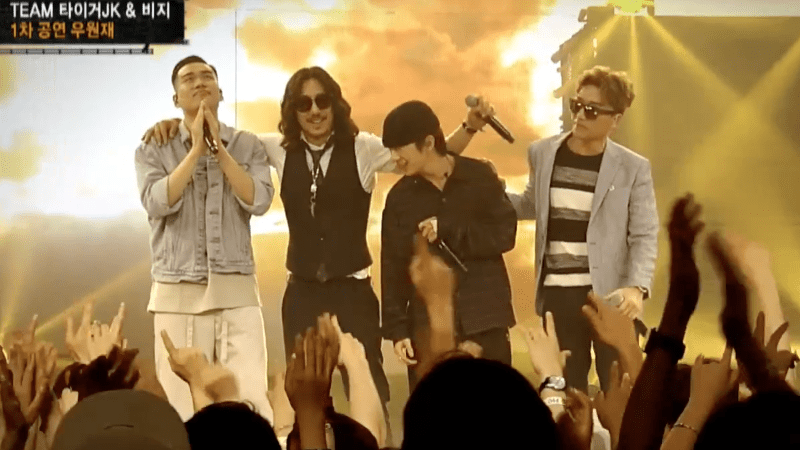 During the August 18 episode of “Show Me the Money 6,” rapper Woo Won Jae from Tiger JK and Bizzy’s team touched the hearts of listeners worldwide in more ways than one.

Woo Won Jae’s newest track “Again” features abstract lyrics of the rapper’s personal fight with depression. During an interview, he had said that he was in the same situation as teammate Black Nine, and suffered from symptoms of panic disorder, depression, and anxiety.

He reflected in the interview, “No matter how I see it, I’m no different to any other person. I resent that I’m having a hard time. I was sad that people saw me as a ‘wrong person’ rather than just a ‘different person.’ I performed music like that [in the first few rounds] because I wondered why they keep only seeing me as a weird person.”

His newest track “Again” takes a realistically hopeful look at trying to overcome his demons, while staying candid about his conflicting feelings of loneliness, self-deprecation, and more.

Viewers commented things like, “Woo Won Jae’s lyrics are seriously so good,” “It’s so relatable,” and “I really respect you all.”

Many also praised the two producers for featuring vocalist MRSHLL (Marshall Bang), the first known openly gay singer in the Korean entertainment industry. He was recently signed to Tiger JK’s label, FeelGhoodMusic, and has plans to release an EP in South Korea. Tiger JK responded to one Twitter comment, with a simple message that said “Love.”

Thank you for this. Every moment this happens we come closer to the industry being an open place for any LGBT Korean artist.

Tiger JK later expressed his gratitude and pride for his team members and MRSHLL through a touching Instagram post.

He wrote, “The last 10 years during which it was uncomfortable for me to behave normally without medication since my acute transverse myelitis might be the reason I am more drawn to these friends… Woo Won Jae and Black Nine who are having a hard time because of depression, Maniac who is shedding black tears, and MRSHLL, who said he just wants to perform music honestly without hiding that he’s gay…love to these homies and you. Give strength to a lot of people with more great music from now!!!”

MRSHLL also posted that he was grateful, and explained this track is special to him because it’s his first Korean release as well as the first time he’s officially sang in Korean.

Check out their full performance below!

Bizzy
Tiger JK
Show Me The Money 6
MRSHLL
Woo Won Jae
How does this article make you feel?