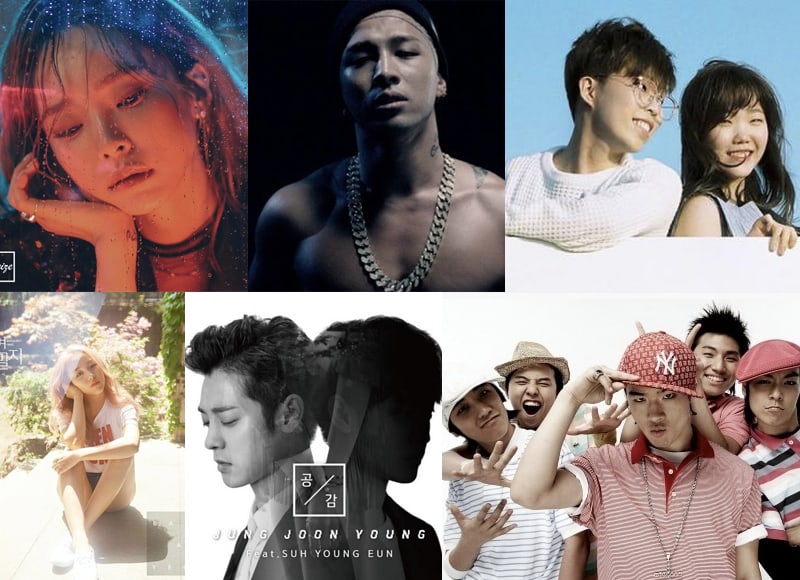 6 Breakup Songs Based On Actual Breakups

Encounters eventually entail a parting. Breakups can hurt, and at times can be the source of great suffering. But some singers turned around their heartache and created best-selling songs out of the experience.

Here’s a look at six breakup songs that were inspired by true breakups!

In a recent a variety show, Heize revealed, “‘Don’t Know You’ is about a boyfriend I met when I had just made it to Seoul and had no money at all.” She explained that she broke up with the boyfriend from that time.

“I still have gifts and traces of him left at home,” she noted, and added, “I was never able to give him gifts, so it’s saddening to think that he has nothing to remember me by.”

In a past variety show, Taeyang revealed that “Eyes, Nose, Lips” were inspired by his own love story with actress Min Hyo Rin.

Taeyang is never shy of showing his love for Min Hyo Rin, as he also recently interviewed, “Min Hyo Rin is my muse who inspires me because she is the person I love the most.”

Lee Chan Hyuk from Akdong Musician also wrote a song based on one of his actual breakups. The singer chose “Last Goodbye” as the song that he is most attached to, and explained, “It’s a personal story. I cried while writing it.”

His sister Lee Soo Hyun testified his comment. “I saw it myself. I heard someone sobbing while I was heading to the bathroom. When I looked in the room, [Lee Chan Hyuk] was recording the song while crying and playing guitar,” she revealed.

Baek A Yeon’s “Shouldn’t Have”

Baek A Yeon’s first self-written song “Shouldn’t Have” is another song inspired by the singer’s real life experience.

She confessed, “I wrote what actually happened to me in the lyrics. I had to write a song just at the time, and something exactly like the lyrics had occurred to me. I was really shocked and I cried while writing it.”

The lyrics of “Shouldn’t Have” includes phrases such as, “It was foolish of me to think that you, who cowardly hid way, would return,” and “You shouldn’t have hugged me that night if you were going to be this way.”

The lyrics of Jung Joonyoung’s ballad “Sympathy” touched the hearts of many listeners who went through similar breakups.

Jung Joonyoung explained, “‘Sympathy’ is about a typical breakup that anyone might go through. It’s also a song based on my own experience.”

The last song on the list is BIGBANG’s track from their early days since debut, which is G-Dragon’s solo remake of Maroon 5’s “This Love.”

The song’s lyrics were written after G-Dragon was dumped by his first love.

Do you know any other songs that were inspired by real life breakups?