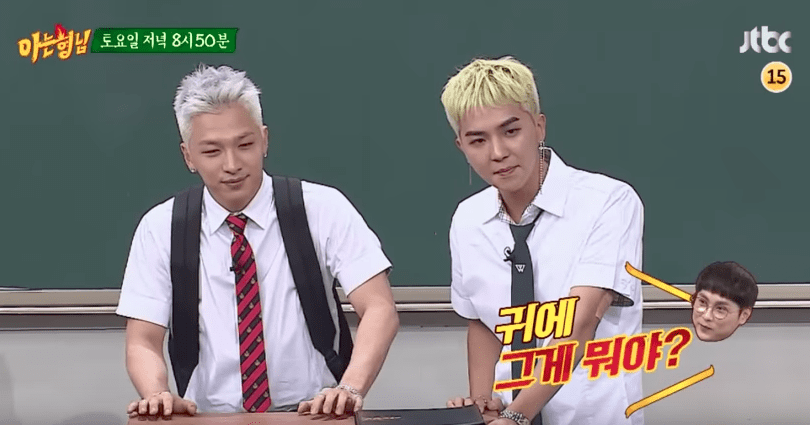 Watch: Taeyang And Song Mino Are Left Dumbfounded By Unexpected Answers In “Ask Us Anything” Teaser

BIGBANG’s Taeyang and WINNER’s Song Mino are the next guests that will appear on the upcoming episode of “Ask Us Anything,” which already promises to be hilarious based on the preview!

In the video, Taeyang shows off his dance moves, “sings” and reenacts his song “Eyes, Nose, Lips” (on Kang Ho Dong), and is left shocked when he hears, “There seems to be a rumor that says [Taeyang] is BIGBANG’s Kim Young Chul.”

Song Mino also shows off his talents with a short rap, and gets teased about his long earrings.

Hilariously, both artists were left speechless because of Kang Ho Dong in the preview. When Song Mino asks his “New Journey to the West” castmate to choose between himself and Lee Seung Gi, Kang Ho Dong replies, “Lee Seung Gi!” Feeling betrayed, Song Mino comments, “He’s not the hyung that I know.”

Taeyang tries to ask Kang Ho Dong a question of his own, and unexpectedly says, “[Do you choose] Lee Soo Man or Yang Hyun Suk?” When the other cast members ask if he’s being serious, since Kang Ho Dong is under SM C&C, Taeyang makes everyone laughs by confessing, “Sorry, I didn’t know.”

The two singers will also be facing off against the “Ask Us Anything” cast in games, as well as a skit. This episode is set to air on August 26.