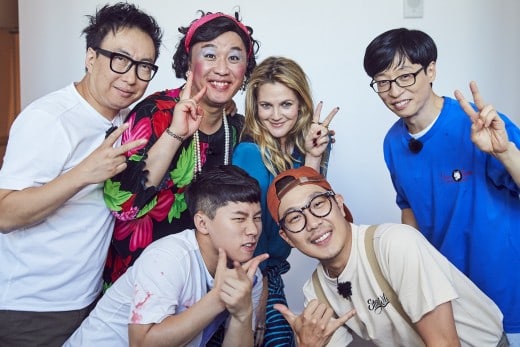 On the August 19 episode of MBC’s “Infinite Challenge,” the cast took on their dream of starring in an American drama by joining Netflix auditions in the episode’s two-part “La La Land” special.

The group began the day by auditioning for Netflix’s “GLOW.” The cast transformed into male wrestlers and showed off their strength as they took on each other. First up was Jung Joon Ha who displayed his power as he devoured some grapes as “The Yeti” and Yoo Jae Suk who was “The Kissman.” Ultimately, Jung Joon Ha was unsuccessful while Yoo Jae Suk was highly praised by the judges.

Next up were the rivals HaHa and Yang Se Hyung. HaHa threw a honey punch at Yang Se Hyung, which left the judges cracking up. Yang Se Hyung stared in amazement and said, “HaHa is a lethal killer!”

Park Myung Soo was in low spirits as his nerves got the better of him. Struggling to keep his stick-on mustache in position and mixing up his English, the comedian decided to give up.

Next was an audition for the highly anticipated fifth season of the Netflix show “House of Cards.” Here, the cast members met actor Michael Stamper, who plays the Presidential Chief Secretary on the show and was judging the audition. Yang Se Hyung showed off his infamous forehead flick and did an exaggerated impression of the show’s character, President Garrett Walker.

Park Myung Soo was nervous again, but pulled off a completely natural performance and even made Michael Kelly laugh after pulling out a trophy from the MBC Entertainment Awards from up his sleeve.

Jung Joon Ha, who has experience in acting, began his audition strongly. However, Michael Stamper threw in a twist and asked him to perform his audition again, but pretended he had to pee. After completing the challenge, Michael Stamper applauded him saying, “You’re a fantastic actor, it was perfect!”

Finally, the group began their final audition of the day for the drama “Alphas,” which is set to be filmed in a Korean town. Jung Joon Ha was first and was asked to dance as an eagle. Though he was a little embarrassed, he took on the challenge like a champ. Next, the rest of the cast was invited into the audition room and was assigned an animals, such as a wolf, an ostrich, a snake, and tiger. The group was then asked to attack a ladder placed in the middle of the audition room as if it was prey that their animal was attacking. Fighting off embarrassment, the comedians went crazy and fully embodied their assigned animals!

At last, the cast received the results of the audition and learned that Yang Se Hyung, HaHa, and Yoo Jae Suk passed the first audition. As the three of them proceeded to Universal Studios to complete the next audition, they were attacked in the elevator by zombies! It turns out, Universal Studios was holding a zombie experience day and the cast got to dress up as zombies as well in the end. After experiencing being a zombie, the cast noted that it was not an easy job!