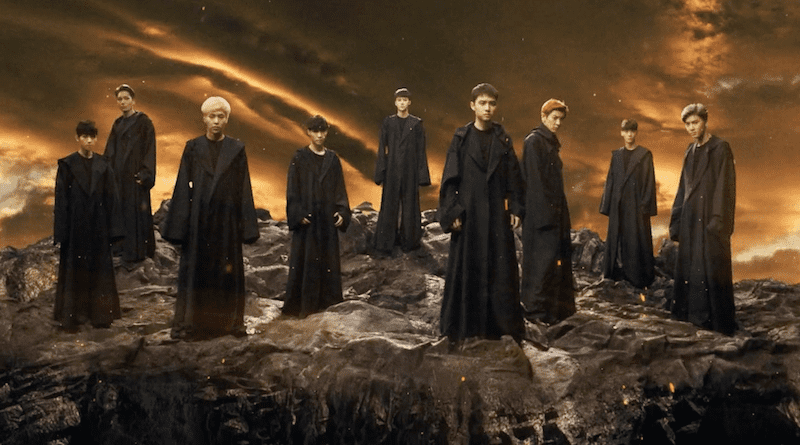 When EXO released an unexpected video at the same time the 2017 total solar eclipse began in Oregon, fans put their thinking caps back on and took a nostalgic trip down memory lane.

Days before EXO even announced anything, many were joking about how the solar eclipse meant that EXO would be coming back because of the monologue that is included in the group’s “MAMA” music video.

there's gonna be a solar eclipse on the 21st … y'all know what that means pic.twitter.com/3CbvVdA7CR

It may have started as a joke, but as soon as EXO posted a mysterious message about the date, time, and location the solar eclipse would hit the US coast on August 21 KST, theories began popping up rapidly.

[exo tweeted about the eclipse out of nowhere]

exo-ls:
"is this for repackage album?"
"another pathcode?"
"WHAT?!"
/formulates theories/ pic.twitter.com/TnmHPi1Ntu

Hours later, EXO unveiled a video that ended with “a message from EXO Planet,” that read, “The power of music arises when the eclipse occurs.”

The first connection almost everyone made is how an eclipse, or the story mentioned in the “MAMA” music video in relation to the eclipse, has reappeared in every single one of EXO’s comebacks. Along with this, people pointed out more significant appearances in multiple pre-debut teasers, the “pathcode” teasers from 2015, and even in Lay’s solo release.

Seriously, no matter what concept exo goes for, wolves, monsters, power rangers, we all go back to the freaking eclipse.

"Shining shining you're like a diamond!" The Diamond Ring Effect is one of the final stages of a solar eclipse. Where have I seen that? #exo pic.twitter.com/C86SZL1c2c

As for how all of these videos connect with each other, a 2015 tweet from EXO’s old “pathcode” account suggested a possible answer.

People also found a historical tale about a solar eclipse that once stopped a war. When considering EXO’s most recent album was titled “The War,” along with the 2015 post, some suggested that an overarching story is being told in reverse. In addition, EXO’s most recent concert series opened with a video that was titled “The Story of the Past,” and the members have mentioned how their most recent title track “Ko Ko Bop” talks about the night before a war.

So the Greek story. The eclipse actually brought about the end of the war. There is a fan theory that EXO's concepts go in reverse order.

If we assume that's true (theory!), then the upcoming eclipse would be the end of a war, Kokobop and previous concepts are after the war.

what's more amazing is that exo's era is moving forward but at the same time backwards, it will always make you look back where they started

“Pathcode”—the teasers that were released for EXO’s previous “EXODUS” album—made another reappearance in some of the photo cards that were included in version A of EXO’s “The War” album. Fans also remembered the significance of “a message from EXO Planet,” in relation to “pathcode.”

"Message from EXO Planet"
i may be reaching but remember how in Pathcode the members received a message? COULD THIS BE THE MESSAGE? pic.twitter.com/37VxmrQbUf

They also couldn’t help but notice how a couple of major events related to EXO—in 2006 and 2012—were also the dates of other solar eclipses. In addition, the next total solar eclipse that will pass through North America will be on April 8, 2024, which will be EXO’s 12th anniversary since debut.

When you suddenly remembered that eclipse also happen back in 2006(exo acc made) and 2012(debut) #shookt #exoclipse pic.twitter.com/xiBXlRt9hI

….the next solar eclipse is gunna fall on exos annivesary pic.twitter.com/GpGt5lQ1Gr

It didn’t escape fans’ notice that the eclipse happened on August 21 local time, and that the video is also exactly 21 seconds long.

These theories wouldn’t be complete without including an analysis of the members’ past actions and words. Several EXO members have been spotted making a “strength” pose in the album and during the group’s exclusive V Live content, while Sehun has consistently posed in one manner multiple times.

The lyrics that can be heard in the mysterious teaser are in line with something Baekhyun said recently, while Suho has mentioned “strength” in his most recent post on EXO’s fan board.

JM:
"It has ended but you know that this is not the end right? I will become EXO Suho that will give everyone STRENGTH(power)!" pic.twitter.com/HOIvBCQ49Z

LDN Noise, who has produced many of EXO’s past hits like “Monster,” “Forever,” and “White Noise,” also seemingly gave another hint that can be tied back to the popular television show and book series, “Game of Thrones.” While the famous phrase has several meanings, the author of the book series, George R.R. Martin has been credited to have said that winter is a metaphorical representation of “a dark period.”

So Ldn noise used a game of throne reference to announce EXO comeback.

Apparently it means an evil force is coming?

Meanwhile, EXO has confirmed that they will be making a comeback in September with a repackaged album.

What are some of your theories about EXO’s releases?