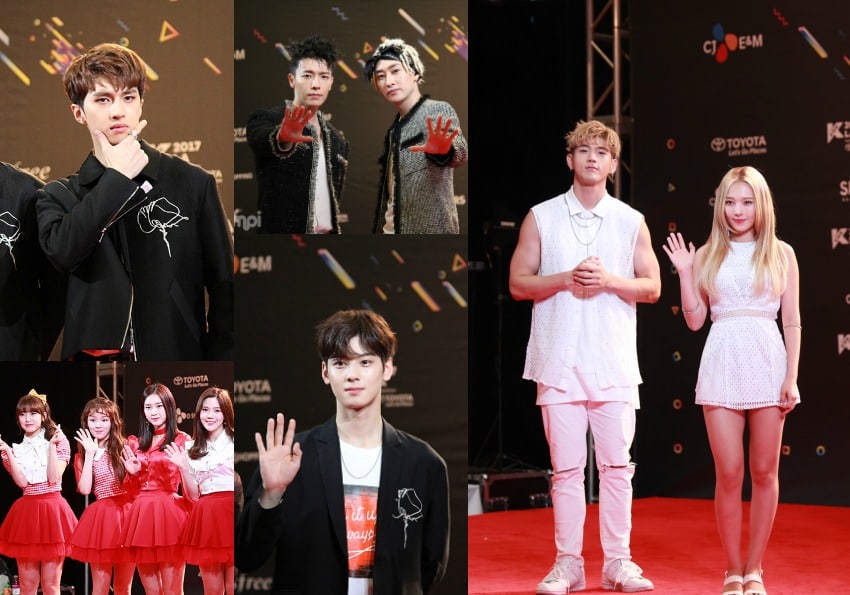 Every year it seems that KCON outdoes themselves – more special guests, more special events, and more amazing performances at the M-Countdown concerts.

This year was no exception! With a killer lineup (NCT 127, GOT7, Oh My Girl, Kim Tae Woo, ASTRO, SF9, Cosmic Girls, Heize, VIXX, KARD, Girl’s Day, Wanna One, SEVENTEEN, and SUPER JUNIOR D&E), each of KCON’s three days was jam-packed with new surprises. A special change to the concert format was having all the groups perform a b-side in addition to their hits, which provided a super special opportunity since international fans usually don’t get the chance to see their faves perform hit b-sides.

Here are some of the event’s highlights for us – including some shots from the red carpet of the event: 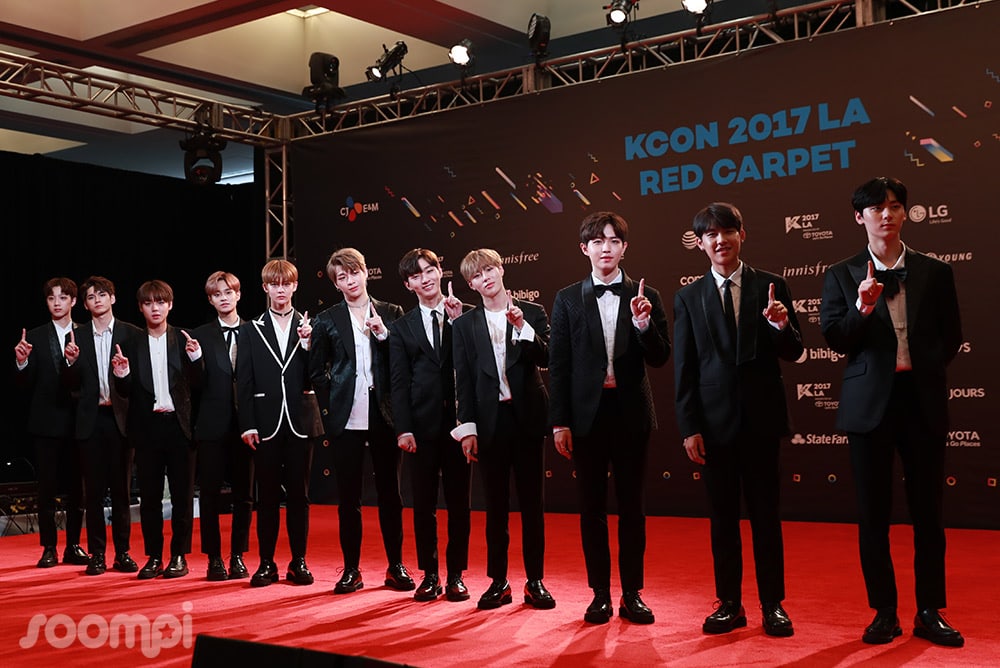 When Wanna One was brought out to the convention floor to meet and greet with fans, it was a completely amazing moment. With this being their first ever trip to LA, and so soon after their official debut, I wasn’t sure what the fan reactions would be to them. But – they had a TON of fans. The entire convention room became essentially gridlocked by fans craning their necks to see as much of the group a possible. And it was worth it – the group was totally at home greeting their international fans. They later went on to take over the evening concert – performing “Energetic,” “Burn It Up,” “Pick Me,” and “Never.” 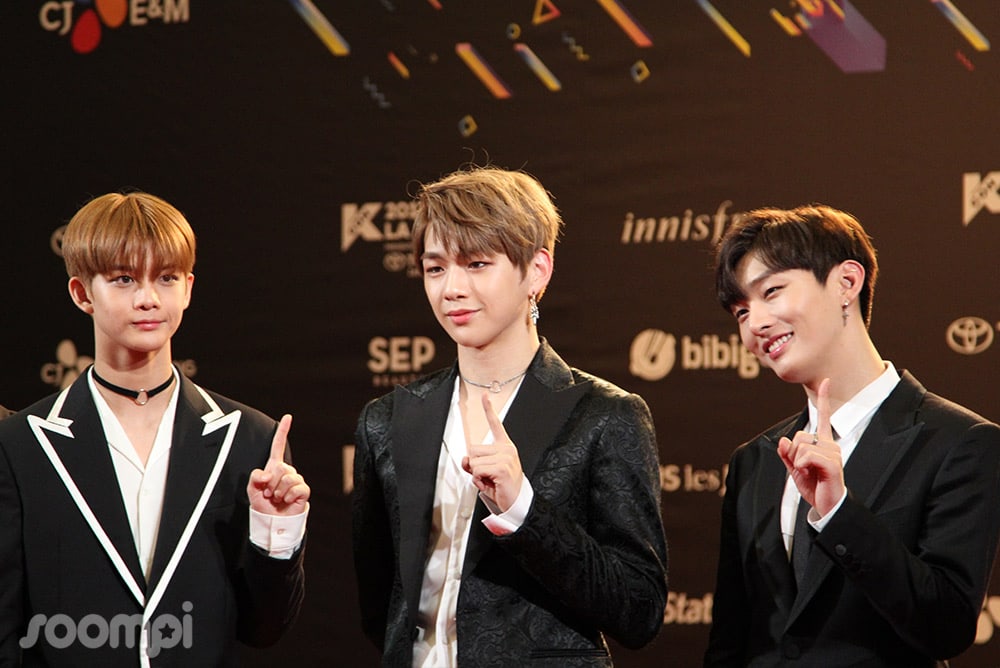 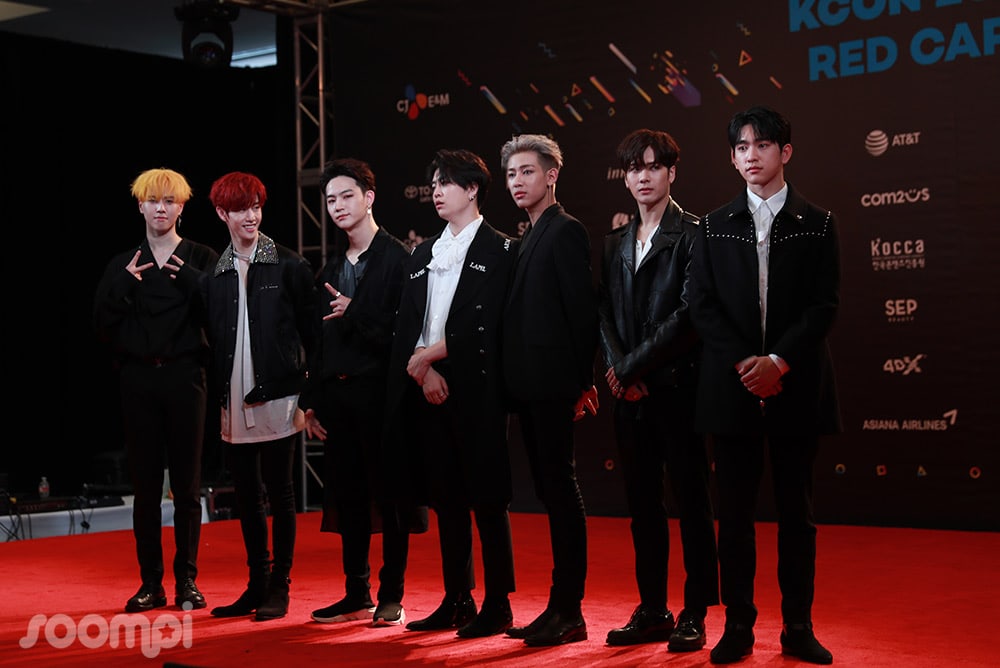 If you were at the red carpet, you may have caught GOT7 being as extra as possible. When Jackson didn’t get a mic, Jinyoung was eager to pass his off to him. In very Jackson fashion, they instead held the mic between them – or should I say, showcased the mic between them. Jackson and BamBam also did the running man dance off the stage. Because – why not? GOT7 also closed out KCON LA 2017, ending the show on Sunday and bringing the whole arena to their feet to dance along with “Hard Carry,” “Never Ever,” and “Everyday.” Fans were also treated to JJ Project performing “Tomorrow, Today.” But GOT7 really brought the laughs when they took on their “Piñata Time” mission: a proposal. Despite Youngjae crooning “I’m The One” and BamBam cheesily running across the stage to deliver a pick-up line, it was actually Jackson who probably stole the segment. When he descended from the stage to hug the lucky winners, he had to turn around when he realized that they were taller than him. Luckily that didn’t give him too long of a pause, as he still ended up hugging the fans. But the whole arena definitely had a good laugh at his misfortune. 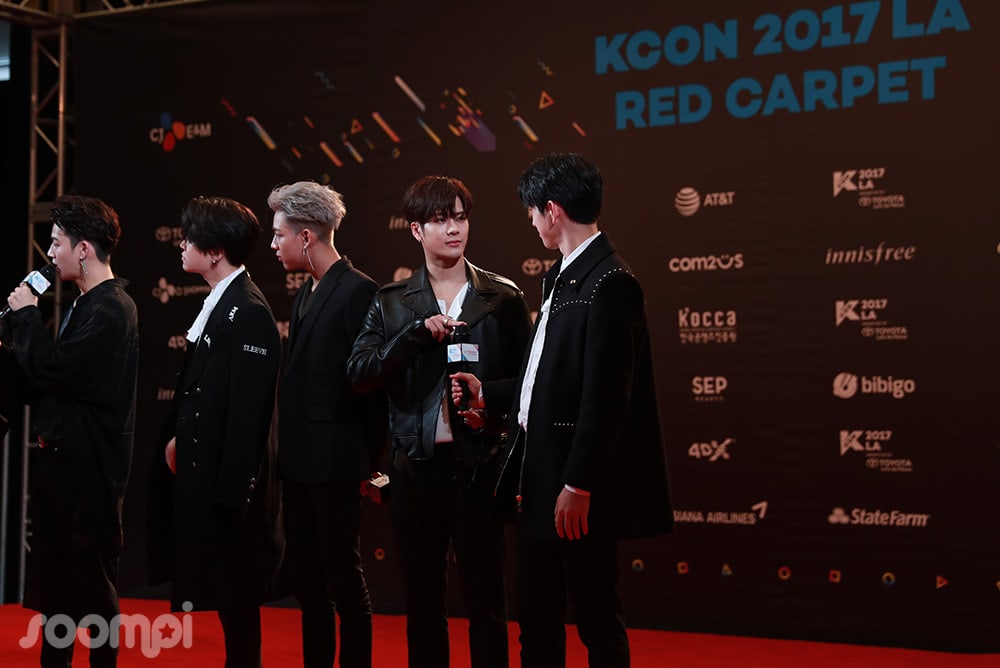 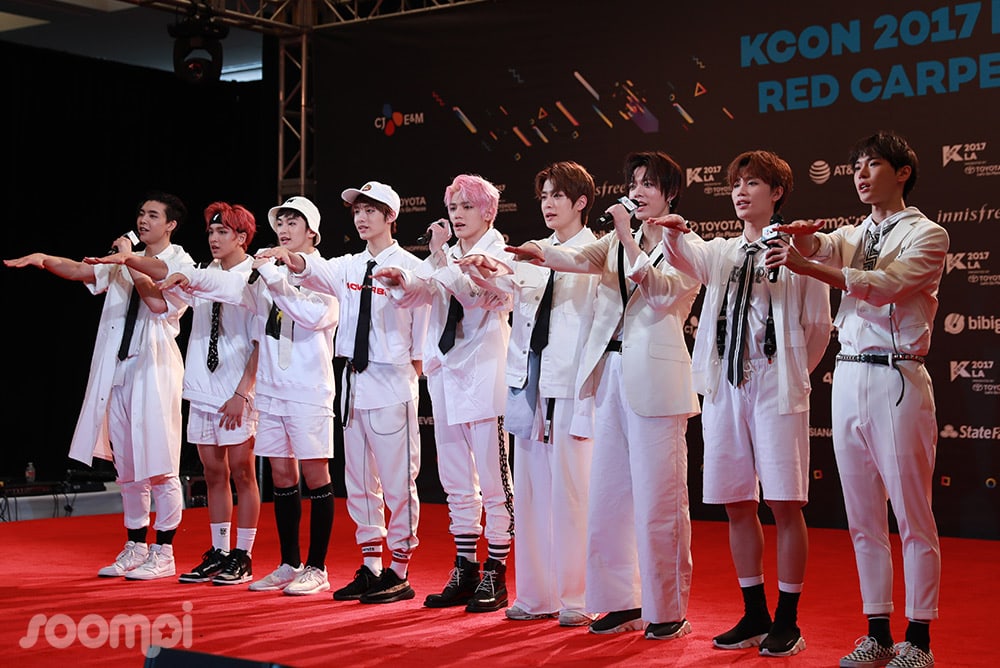 Every time NCT 127 performs, it’s full of cool stage effects and slick choreography. Seeing them perform their latest bop “Cherry Bomb” was an extra treat – cause fans were able to scream along to pretty much the entire chorus. 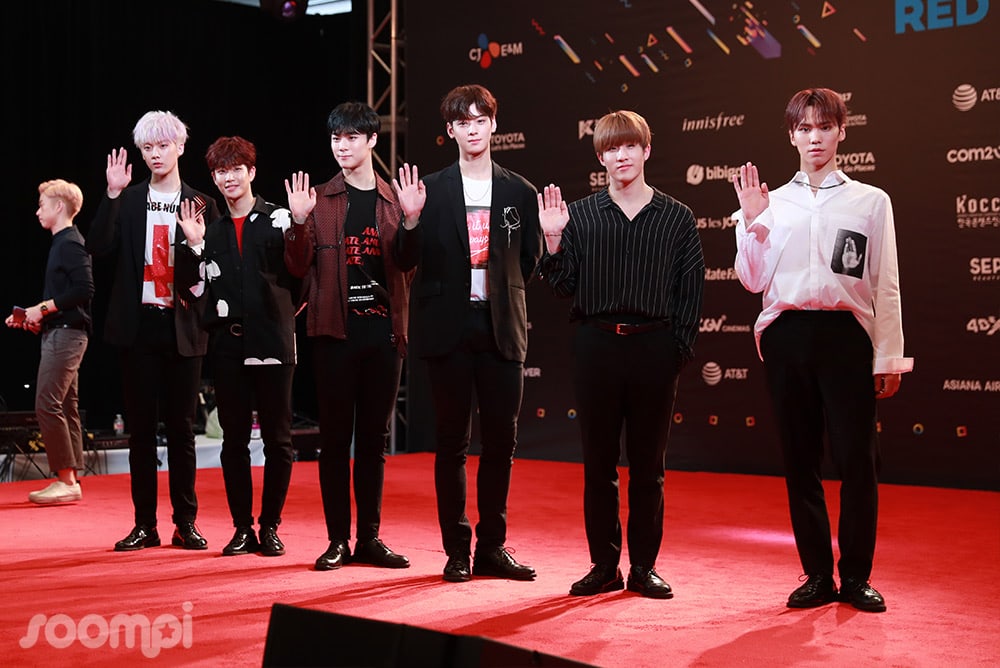 ASTRO was pretty busy this year at KCON – from covering G.O.D’s “Place Where You Need To Be,” to performing a special stage with Kim Tae Woo to cover “One Candle,” to even taking the time to grant fan wishes through the “Pinata Time.” Perhaps the most memorable was their “Pinata Time” – when they had to quickly design and sign T-shirts for fans in 1 minute. MJ spent most of the 1 minute trying to shove his t-shirt over Eunwoo’s head – only to sign it once it was successfully on Eunwoo’s body. It was just a lot of screaming and running around. And it was perfect. 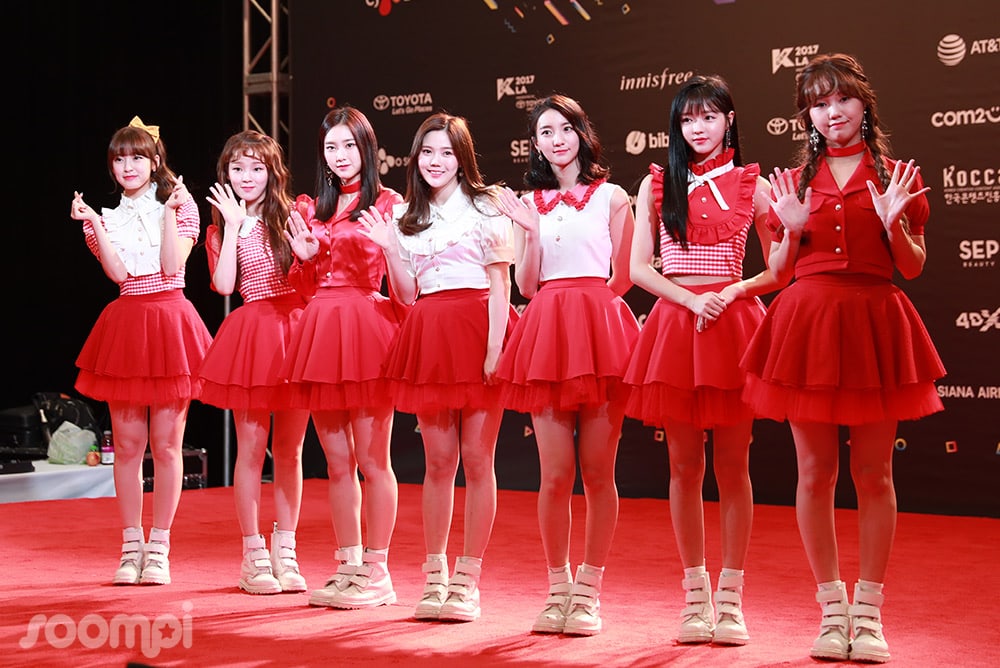 Oh My Girl was a special guest this year at KCON, and we were so grateful when they took to the stage to perform their latest hit “Coloring Book” alongside their super catchy “Closer.” Dressed in frilly all red, they really kept the energy high and the audience dancing along. 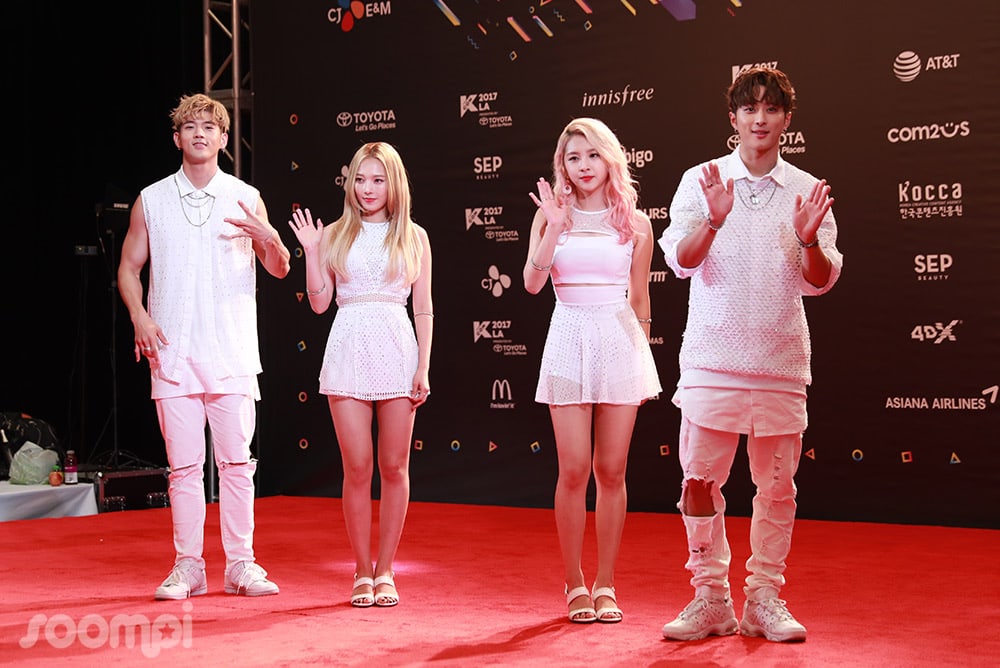 KCON saw two groups in attendance who just recently (very recently) debuted. When KARD took the stage to open the show on Sunday, they were just like season K-pop stars. The crowd screamed along to their hits – and even better, BM had the entire stadium sing happy birthday to Somin whose birthday was the following day. Having over 18,000 people sing you happy birthday must be quite the experience, and Somin was nearly brought to tears by the outpouring of support from the crowd.

7. Heize’s Performance of “Star” With An Audience of Stars 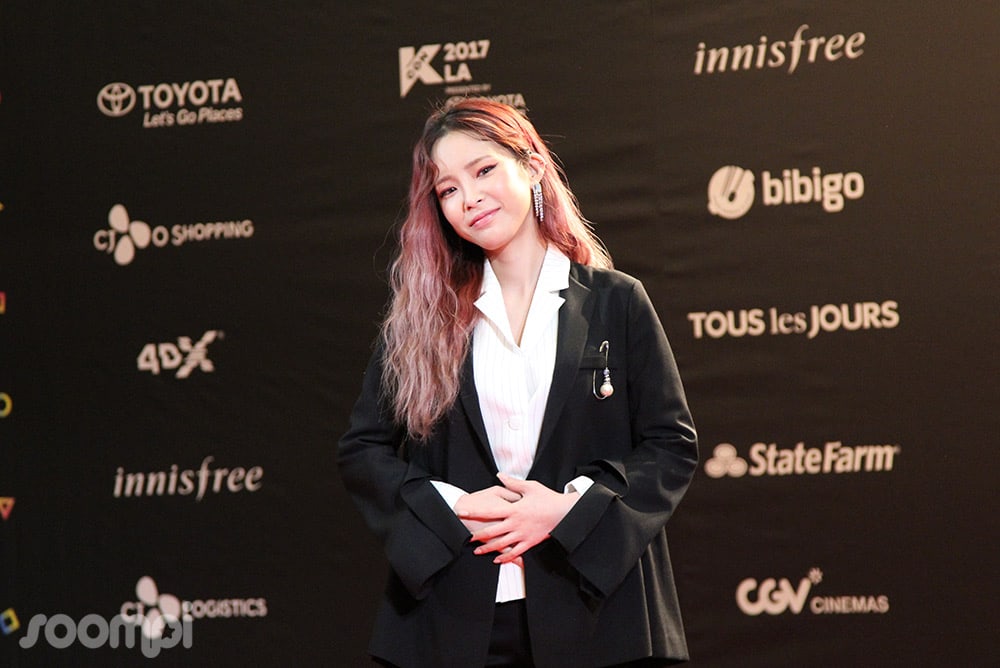 Right before Heize began her rendition of “Star,” the entire audience of the staples Center turned on their phone flashlights and lit up the venue. It was a simple but powerful backdrop for her to perform to, and she was visibly touched by the fans support for her first ever KCON appearance. Heize was definitely a great addition to KCON this year, as it was fun to see just how humble and nearly overwhelmed she was from all the support she received. 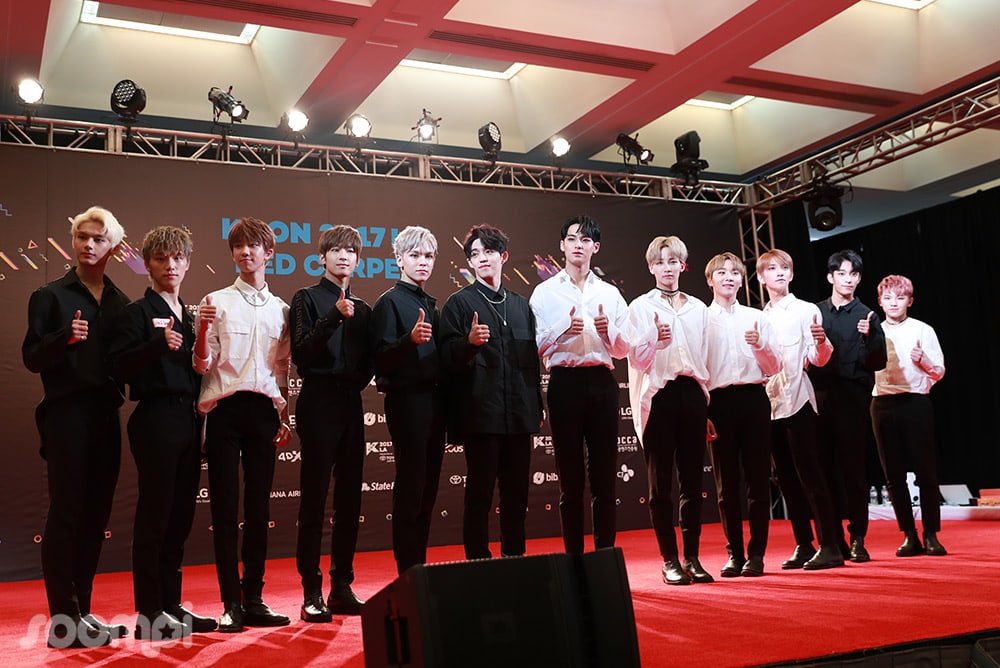 SEVENTEEN’s current tour may not be stopping in LA, but the group brought the experience to the KCON stage to keep LA carat’s somewhat satisfied. Despite Hoshi’s absence, the rest of the group rallied to keep energy high. The group started off with their unit stage – with the performance unit showing off “Swimming Fool,” the vocal team crooning “Habit,” and closing with the hip-hop unit’s take on “Check In.” When the whole group finally reunited on stage, the performed “Don’t Wanna Cry,” “Rock,” and “Very Nice.” 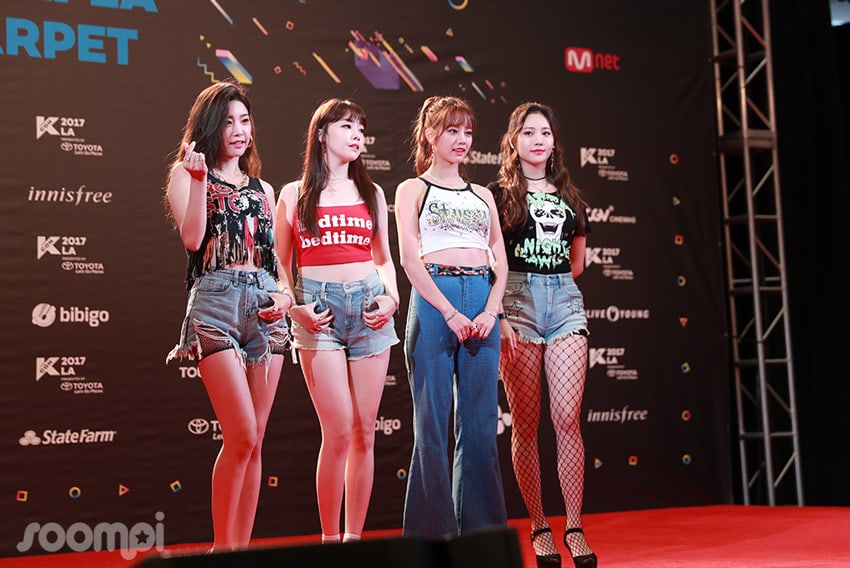 This was Girl’s Day first KCON experience (so many new groups this year!), and it was obvious that their fans have been waiting not-so-patiently for them! Everyone stood up when their iconic “Something” began, and the group rounded out their stage with “Ring My Bell” and “I’ll Be Yours.”

10. VIXX Reminding Us All Why They’re KCON Regulars 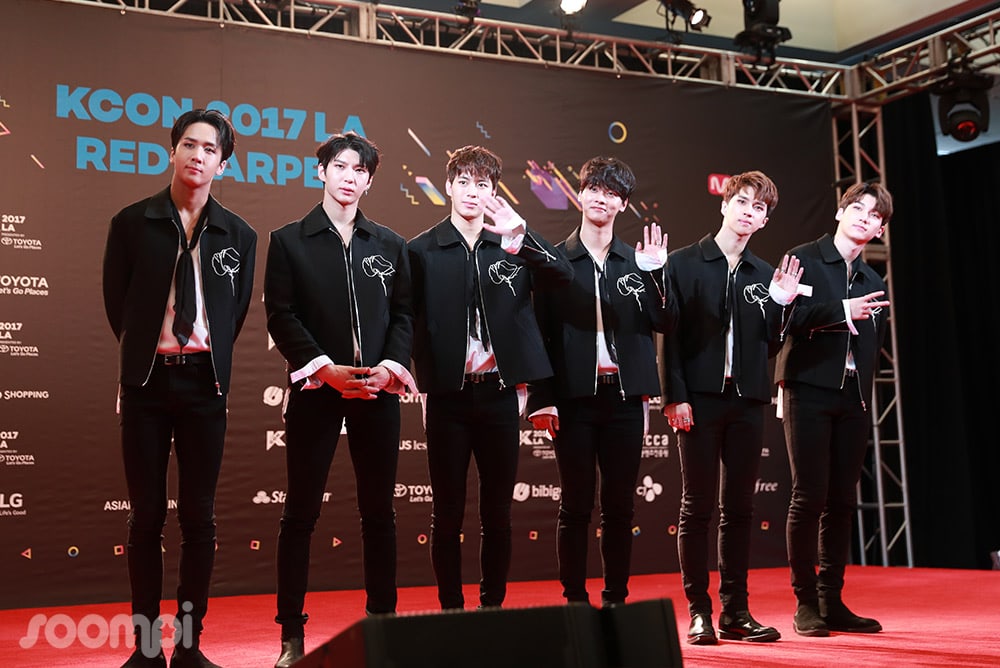 VIXX, a group that is no stranger to KCON, has continued to shock us each year with even more dynamic performances. This year, the group brought us “Shangri La” (and their super coordinated fan dance), “Fantasy,” and “Black Out.” But, VIXX also opened the show on Saturday, with Leo emerging on stage playing a grand piano for a performance of the La La Land hit “City of Stars” with Girl’s Day’s Minah. VIXX also took on “Pinata TIme” – and received the photo time challenge. As they went around the stage posing, the group took on cute poses (where Ken shined), sexy poses (featuring N’s infamous model pose), and more. No matter how many times we see VIXX at KCON, they always bring something new to the stage and continue to blow us away! 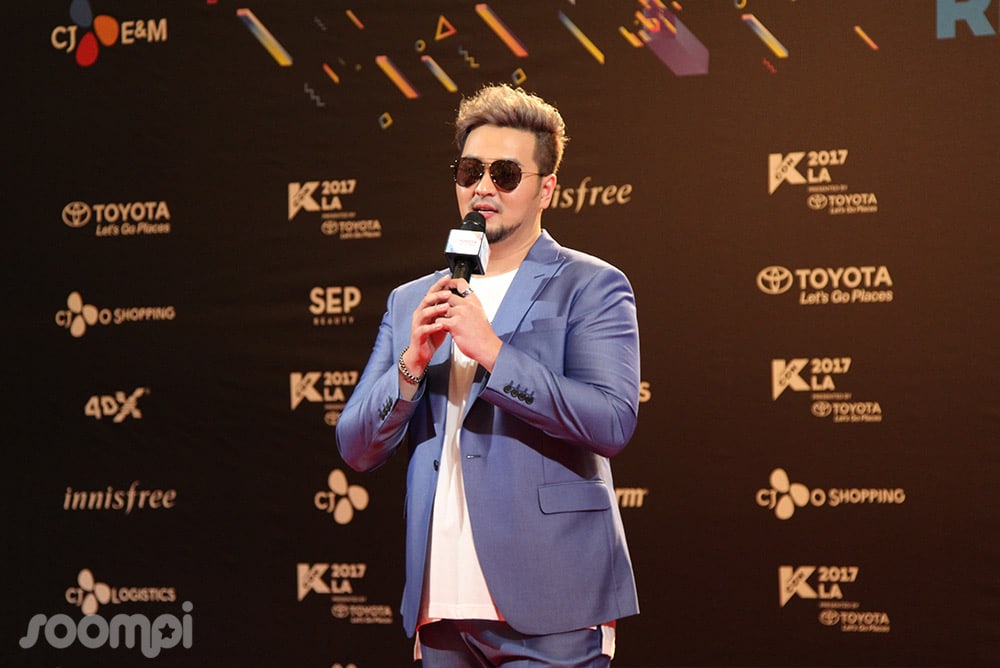 Kim Tae Woo was the special legend for this year’s KCON and he was able to bring the classics back to life with his ASTRO special stage. He began with performing G.O.D’s “One Candle” alongside ASTRO, before going solo and launching into his latest hit “Following” and closing with his classic “Love Rain.” The whole audience was able to sing along, and I definitely saw longtime K-pop fans crying in the audience. I won’t call you out – but I saw you. 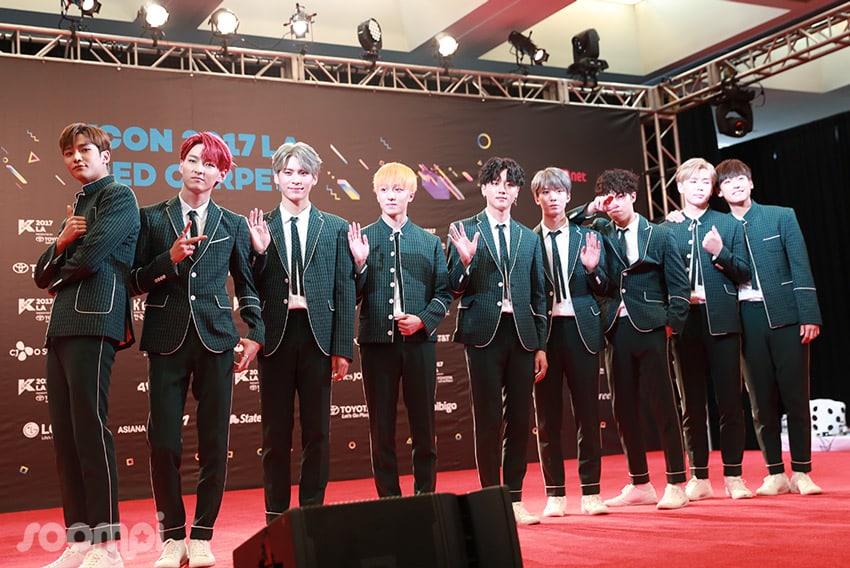 SF9 attended KCON LA after wowing the U.S. audience at KCON NY. This time, they also brought some killer choreography to the event. The group performed “Easy Love,” “Fanfare,” and totally blew the crowd away with the “Jungle Game” performance. The group pulled off moves that I didn’t think were humanly possible. Shoutout to Chani for flipping around flawlessly! Please see below and please be as amazed as I was. The audience was also treated to SF9’s Inseong showing off his English slang – but really he just said it was “lit” at least four times on Saturday throughout the day. Which was perfectly acceptable, as it was, indeed, lit.

13. Cosmic Girls Staging a KCON Takeover – Blessing All Their Fans 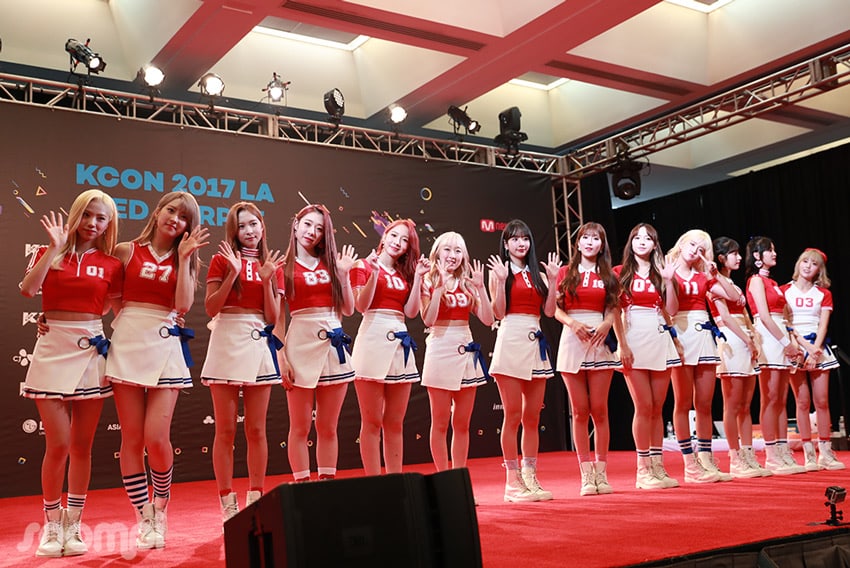 We’re pretty sure that all the girl-group-starved fans were finally excited for the KCON lineup this year – especially when KCON announced the lovely ladies of Cosmic Girls as guests. The group performed “Happy,” “I Wish,” and “Secret.” With their adorable cheerleader themed outfits and an amazing intro complete with a marching band to welcome them to the stage – Cosmic Girls definitely left a huge impression for their debut KCON.

14. SUPER JUNIOR D&E Jumping Right Back Into Promotions After The Military 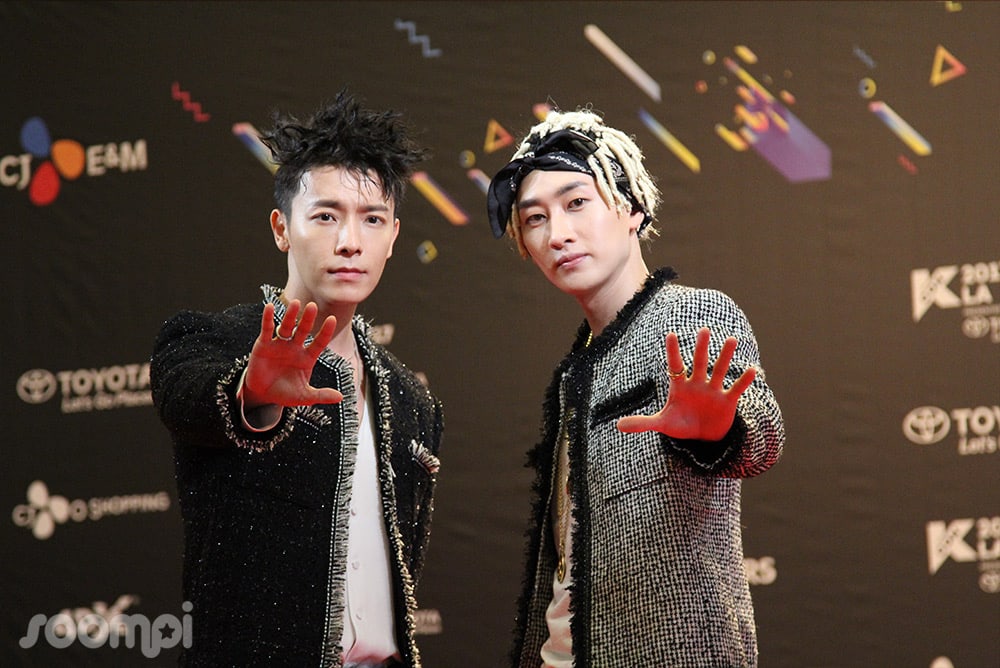 This year at KCON, I heard from a lot of attendees that SUPER JUNIOR was their gateway group – that group that completely sucked them into K-pop and started them on the slippery slope of that K-pop life. This revelation made SUPER JUNIOR D&E’s that much more special – aided by the fact that fans have been waiting to see them for the past two years while they were in the military. Despite their period of inactivity, the duo took back to the stage like they had never left – performing hits like “I Wanna Dance,” “OPPA OPPA,” “Growing Pain,” and “Saturday Night.” As everyone jumped and sang along to their high energy stages, it just make everyone more excited for the new album that SUPER JUNIOR is working hard to prepare. Get hyped!

What were your highlights from KCON LA 2017?