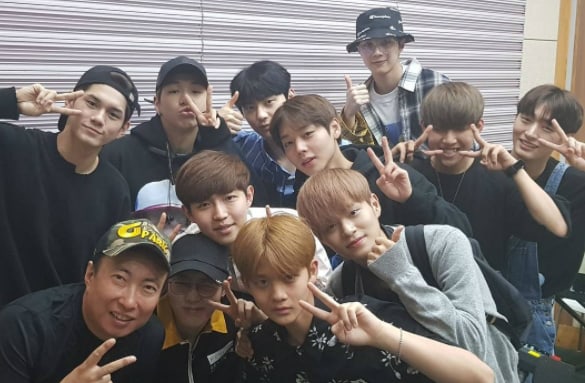 All eleven members of Wanna One made their debut on radio airwaves on August 24 through KBS Cool FM’s “Park Myung Soo’s Radio Show.” Through hilarious jokes and heartfelt stories, Wanna One’s voices filled the airwaves for one hour to the delight of many fans.

Park Myung Soo had many questions and challenges for the first time radio guests, and used his usual crude humor to put them at ease. The challenges started right away with self-introductions. He said, “The entertainment industry is a fight for survival. You have to stand out. If your self-introduction isn’t good I will ring the bell.” However, he made jokes about some preferential treatment to Kim Jae Hwan, who sat next to the radio host during the show because they both graduated from the same high school.

The members also had to go through various tests in order to become his son-in-law, such as making witty two-line poems with the name of Park Myung Soo’s daughter and sharing stories proving they are a good son to their parents. Hwang Min Hyun won the two-line poem challenge, to which Park Myung Soo said, “I will grant you permission to date my daughter. She is ten years old but likes toys,” and made the members laugh with his jokes.

Wanna One also shared touching stories of being a good son. Kim Jae Hwan got emotional and answered, “I feel like I am now being a good son,” while Lai Guan Lin shared that he bought his mom Korean beef and later found out that she cried, receiving applause from the members.

Park Woo Jin said, “I had shingles while filming ‘Produce 101 Season 2’. I wanted to quit then but I made my parents go through a lot and felt so sorry that I couldn’t just quit. I think the best filial duty was fulfilling my dream.”

Bae Jin Young expressed feeling nervous about meeting Park Myung Soo because he is a big fan of the show “Infinite Challenge,” and talked about their current popularity. “We have so many things to be grateful for. Every day is a grateful day. We are tired from our schedules, but are really happy when working,” he said.

Kang Daniel expressed fascination about being on the radio, saying it was cool and fun, different from being on TV, and said it was “really cool thinking just my voice is being heard.”

Wanna One
Park Myung Soo's Radio Show
How does this article make you feel?