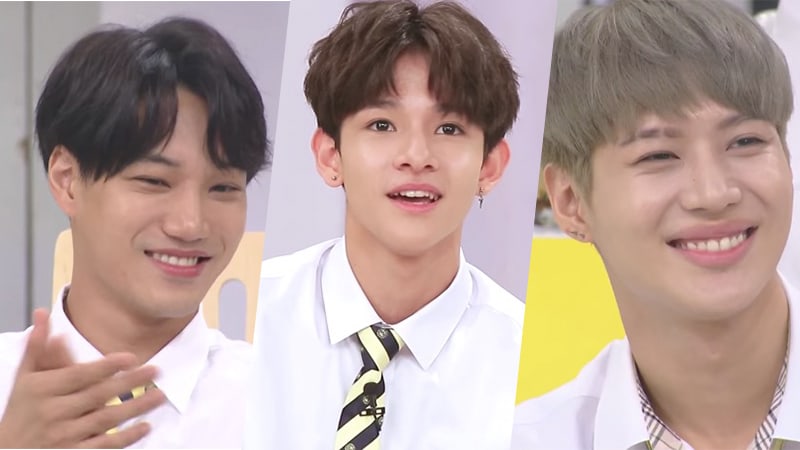 Watch: EXO’s Kai And SHINee’s Taemin Praise Samuel For His Dance Skills On “Happy Together”

On August 24, EXO’s Kai, SHINee’s Taemin, and Samuel appeared for a special “Star Golden Bell” episode of KBS’s “Happy Together,” where they talked about everything from “Produce 101 Season 2” contestants who snored the most to being mistaken for a girl by fellow classmates in the past.

After talking about why he first decided to audition to become a K-pop idol, Samuel showed off his dance moves. As he walked to the front, Samuel jokingly said, “Oh, so this is what it feels like,” to which Yoo Jae Suk asked in response, “What do you mean?”

Samuel answered, “Just this feeling of being watched from not only people in front but also behind me,” which caused the other guests and staff members to laugh at his cute honesty. His short performance, during which he went back and forth between facing forward and engaging with the other guests behind him, earned him remarks of admiration and respect.

EXO’s Kai and SHINee’s Taemin, who are also known to be great dancers, smiled proudly while watching Samuel show off his moves and later praised the rookie artist. EXO’s Kai said, “He’s good at really listening to the music. He’s very good at dancing.” SHINee’s Taemin added, “He did very well! It’s very easy to lose the beat while dancing but he caught on to the rhythm and flow of the song very well.

Watch his performance and their interactions below!

EXO
SHINee
Happy Together
Kai
Taemin
Samuel
How does this article make you feel?