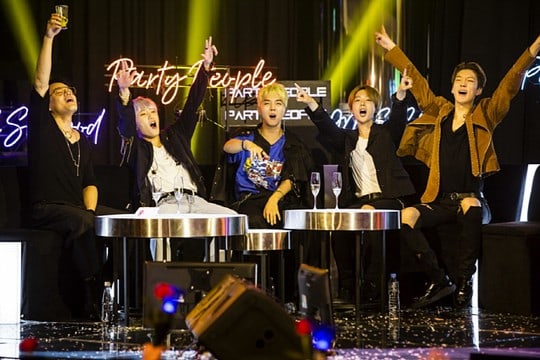 WINNER Rocks The Stage On “Party People,” Reflects On Past With Park Jin Young

WINNER brought all their charms on the August 27 episode of Park Jin Young’s “Party People.”

After a medley of their song, including “REALLY REALLY” and “Island,” the group sat down to talk with Park Jin Young. Lee Seung Hoon was happy to be reunited with Park Jin Young, who had been his mentor on SBS’s “K-Pop Star.” Park Jin Young told Lee Seung Hoon, “It seems like you’ve clearly entered a more relaxed state. I still have memories of you showing us your artistic side through freestyle, even during the survival rounds when you only had a short amount of time.” The host ambushed the young star with a song he prepared so he could show off his impromptu freestyle abilities.

He continued, “Onstage, he is really sexy, charismatic, and strong, but in reality he is a really cute and not a macho-type at all!” Song Minho responded to this description of himself by saying, “Aren’t I a little bit macho?” to which Kang Seung Yoon responded, “Not at all!”

Next, the group talked about Kim Jin Woo. Kang Seung Yoon stated about his fellow member, “He’s the biggest out of all of us, but he has a really soft heart. He always is worrying that we will lose out. He has that soft of a heart.”

He continued, “However, he is becoming a bit of a narcissist about his looks. At first he was really when people told him he was attractive, but now he just agrees!” Everyone thought this was hilarious. 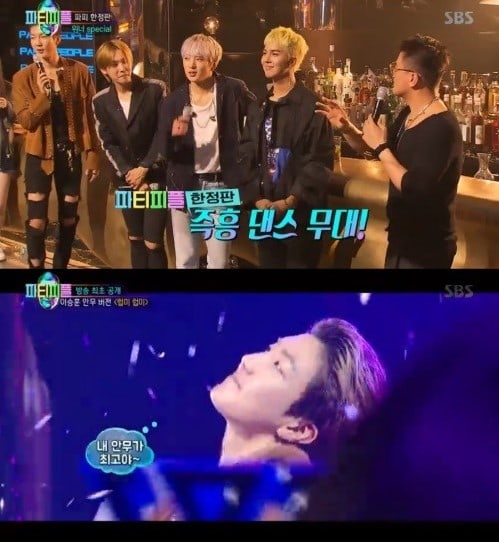 The group moved on to discuss the background of the dance to “Love Me, Love Me.” Lee Seung Hoon stated, “We combined the original choreography and showed it to Yang Hyun Suk.” He responded with just three words: ‘This is strange.’ He gave us some ideas and we changed the choreography.” At Park Jin Young’s request, the group showed the beginning of the song’s original choreography.

WINNER revealed that Wonder Girl’s track “Nobody” was the song that they would have really liked to have. “We really wanted to sing that song ourselves.” Luckily, the group was allowed to present their version of the song on the show, which, when featuring Song Mino’s rap and Kang Seung Yoon and Kim Jin Woo’s vocals, held an entirely different feeling than that of the original track.

Park Jin Young responded to the performance saying, “We certainly have to do casting for this. If you raised [Yoon] Jong Shin’s royalty earnings seven years ago, today you raised it for me,” referring to when Yoon Jong Shin’s “By Instinct” became popular because of Kang Seung Yoon’s performance of it on “Superstar K.”