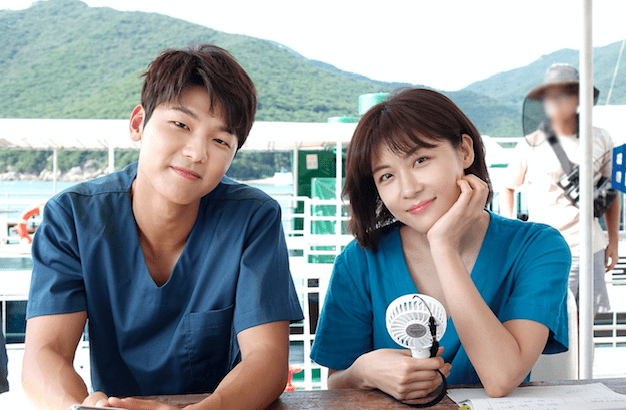 MBC’s upcoming Wednesday-Thursday medical drama “Hospital Ship” tells the story of a hospital crew that travels on a ship to provide medical services to island villages. The main settings are the ship and the island, which is why the drama’s cast and crew will be living on Geoje Island during the period that they’re filming the drama.

Ha Ji Won, who plays the skilled surgeon Song Eun Jae, took most of her belongings to Geoje Island. She revealed that she felt like she was Song Eun Jae who is leaving Seoul and heading for the island in the drama. She said, “I even brought my favorite olive oil and seasonings. On my birthday, my fans sent me daily necessities to use on Geoje Island, and they seem to know me even better than I know myself.”

CNBLUE’s Kang Min Hyuk, who plays the internal physician Kwak Hyun, didn’t bring as many of his belongings, but instead he brought “a fluttering heart and passion.” He explained, “Living on Geoje Island helped me concentrate on acting because I’m actually living on an island and not just pretending to. The way Kwak Hyun volunteers to become part of the ship’s crew and gets accustomed to living on an island will be shown more realistically.”

Lee Seo Won, who plays the traditional Korean medicine specialist Kim Jae Geol, shared that he easily gets hot and packed anything that will help him cool off. He also brought books to study so that he can spend each day on the island more fully. He said, “Rather than worry, my heart was full of joy on my way here. All of the actors and producers are working hard while filming, so I’m working harder too. It may sound unfamiliar, but a ‘hospital ship’ exists in real life. There will be many interesting things you will discover through ‘Hospital Ship.'”