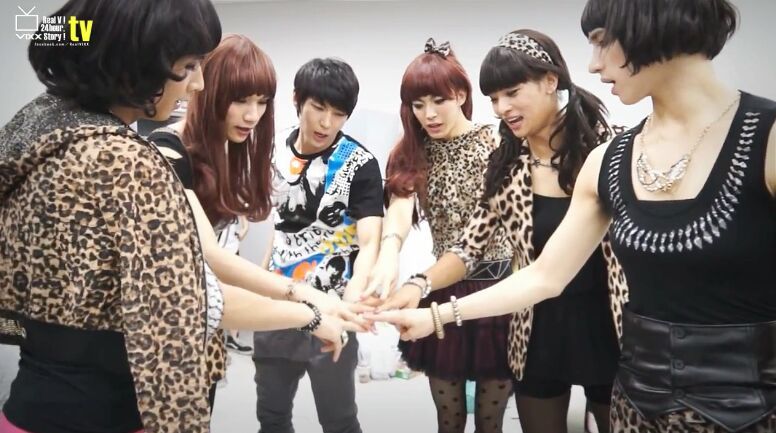 10 Times VIXX Was Way Too Extra On Stage

The six members of VIXX are widely known as concept kings, because every comeback they surprise us with an original idea and take it to the top. It’s not only the music and the video that fits with their concepts; their choreography, stage outfits, props, and beautiful make up all belong to their fantasy world. Whether it’s vampires in space, cyborgs, or voodoo practitioners, one thing is for sure: it’s always worth watching the live stages of their songs, as they never fail to deliver something incredible.

Check out their most extra stage performances!

1. “Hyde” with the infamous black lipstick

Let’s face it, VIXX will never live down that one time they all ended up going on stage with black lipstick on. While the make up actually fit the concept perfectly, the members are still embarrassed about the incident and try to erase it from their memories. As we could ever forget these looks!

2. “On and On” and the colorful lenses

“On and On” started the list of legendary concepts by VIXX. The way they entered the stage with their unique make up and colorful contact lenses was unforgettable. Only a few can rock the extravagant looks and outfits they had on, and VIXX definitely knew how to capture our hearts with their intense stares.

3. “The Closer” with lace blindfolds

Finishing their conception trilogy revolving around Greek mythology, VIXX chose to perform with exceptional props. The sexy uniforms were the perfect outfits to make our heart beat faster, and the appearance of the sensual lace blindfolds was the cherry on top.

4. “Thank you for your love” and the birthday cake

VIXX has always been known for their great fan service, and the boys take every opportunity to show their gratitude towards their beloved Starlights. They wanted to express their appreciation with a song, but the biggest surprise came in the form of a birthday cake during the emotional performance below. We all were a little dumbfounded when Hyuk left the stage all of a sudden, but he quickly came back with the cake. What a nice way to say thank you!

5. “Chained Up” and Leo’s magic button

Every “Chained Up” performance ever was the definition of extra, as we couldn’t get enough of the VIXX members’ sexy moves in hot chokers and suits without shirts. Main vocal Leo’s jacket was only held by one button during this particular stage, and even though we couldn’t enjoy the full beauty of his bare chest, our eyes were still glued to him throughout the song.

Even though “Love Me Do” wasn’t a title song, VIXX performed it on many music shows and we even got to see a special water stage performance of it on “Star Show 360.” The spectacular choreography suits the song perfectly, and the boys looked really hot as they danced on the wet floor.

“Voodoo Doll” is the creepiest concept without a doubt, and it wouldn’t be complete without the long black voodoo stick they used while performing the choreography. Although some broadcasts banned the movements that imitated stabbing with the stick, the dance was still powerful and scary.

8. “Shangri La” and the paper fans

To make their latest oriental-themed comeback even more authentic and outstanding, VIXX decided to use paper fans as props for their live stages. There’s just something special about listening to the opening of the paper fans during the performance!

If the original version of “Now” by Troublemaker wasn’t sexy enough, VIXX and Girl’s Day’s special stage delivered even more! We could see four members of VIXX getting immersed in the choreography, and the whole stage was fire thanks to the epic chemistry between the couples. More collaborations, please!

Is there any way to finish our list other than to mention VIXX’s rendition of “So Hot” by the Wonder Girls? The boys (minus Leo) did everything to bring out their inner ladies, and they were more or less successful in being all pretty and delicate. The vocals and the outfits were no joke, though, and it’s no wonder they managed to steal the show from everyone.

Hey Soompiers, what are your favorite VIXX stages? Let us know in the comments below!