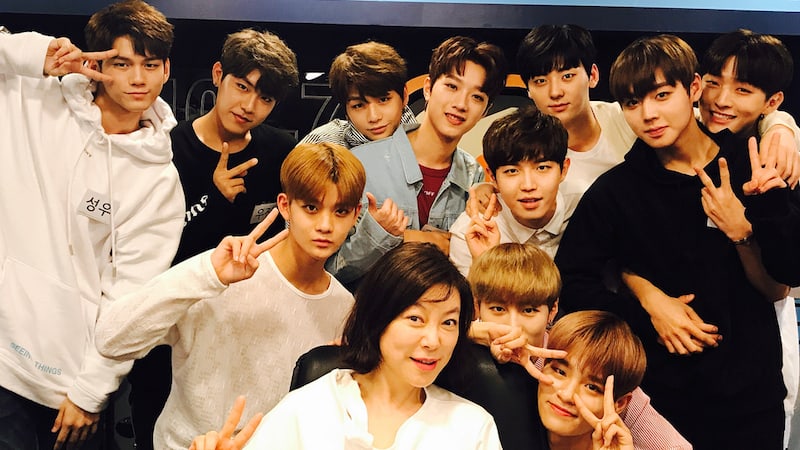 One of the listeners asked who the members would have voted for if they were viewers of “Produce 101 Season 2.”

Park Woo Jin first picked Hwang Min Hyun and explained, “I always liked Min Hyun’s sweet voice, so I actually rewatched his singing performances a lot. Like it was so nice when he sang ‘Marry Me,’ so I would listen to it before going to sleep.”

Hwang Min Hyun replied by choosing Park Woo Jin, sharing that he was really impressed when he performed 2PM’s “10 Out of 10” during their second mission, and he really felt his charms at that time.

Bae Jin Young then responded, “Dae Hwi is good at both dancing and singing, knows how to compose and write lyrics, and has lots of talents, so I think he is perfect to be an idol.”

Lee Dae Hwi chose Yoon Ji Sung, commenting, “I think there always has to be an idol with this kind of character. He’s really good at variety shows and takes care of the younger ones so well, so I was really hoping that he would make it into the team.”

Yoon Ji Sung picked Kim Jae Hwan as he is really impressed and proud of how much he achieved as an individual trainee while not receiving care from an agency and knowing no one there.

Kim Jae Hwan jokingly also chose himself, but he then selected Ha Sung Woon as he is talented in various aspects including singing and dancing.

Ong Sung Woo was then chosen by Ha Sung Woon as he is “also multitalented, good at variety shows, good-looking, and there’s just nothing he can’t do.”

When the MC asked who has not been picked, Kang Daniel and Park Ji Hoon mentioned themselves.

Park Ji Hoon then picked Kang Daniel and commented, “He has a nice face for stanning. He is muscular but has a baby face,” to which Kang Daniel returned, “I like good-looking people, and Ji Hoon is very good-looking. Looking at his eyes feels like looking at the universe. His eyes are seriously so pretty. He is handsome.”

Wanna One
Choi Hwa Jung's Power Time
How does this article make you feel?