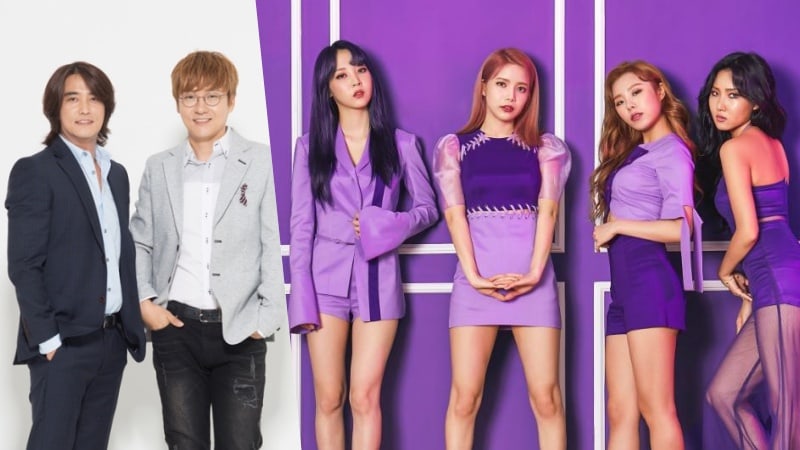 Yurisangja is celebrating their 20th anniversary this year, and they revealed why they decided to team up with girl group MAMAMOO for their new special album.

On September 1, Yurisangja’s Park Seung Hwa and Lee Se Joon held a listening session for their 20th anniversary album “20 Years Old.” During the event, the duo talked about their pre-release track “To My Bride,” which features MAMAMOO and is a remake of their hit 1999 song.

When asked why they decided to collaborate with the girl group, Yurisangja explained, “We were thinking about which junior singers would be perfect for the song, and we decided on MAMAMOO. Luckily, we happen to know someone who works with them, so we sent a request through that person. We were so grateful that they worked so hard on the song.”

The duo continued to add, “We’ve appeared on KBS’s ‘Immortal Songs’ with MAMAMOO before, and though all singers these days seem to be so much more talented than singers in the past, MAMAMOO was a team that really caught our eye with their talent. Both Yurisangja and MAMAMOO are teams that value good harmonization, so we wanted to work with them to see what it would be like to put our harmonies together.”

Park Seung Hwa added on, “They did so well that we didn’t have anything to teach them,” while Lee Se Joon had everyone laughing when he joked, “[Thanks to MAMAMOO], we were able to get a Yurisangja song on the charts!”

Yurisangja’s 20th anniversary album is now available both online and offline, and the duo will hold concerts from September 1 to 3 in the same location they held their first concert 20 years ago.

MAMAMOO
Yurisangja
How does this article make you feel?