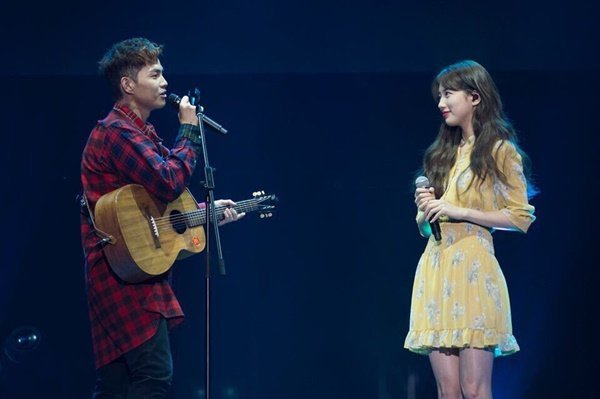 He performed many songs from his discography including his newest title track “all of my life,” which was released less than two months ago in July.

Park Won also sang “Don’t Wait For Your Love,” which he introduced as the song he was most nervous to sing. As the track is originally his duet with Suzy, the audience appeared to wonder if a special guest would appear. While Park Won joked, “Don’t expect anything like that,” Suzy herself made an appearance when it was her turn to sing.

Suzy revealed, “I came for the audience. I also wanted to watch the concert, [so] I’m jealous of the audience members.”

After commenting about how pretty Suzy is, Park Won then joked, “The cheers from the audience were the loudest [when she came out]. Isn’t today my concert?” He turned to his duet partner and asked, “Suzy, can you just continue to stay here onstage?”

Meanwhile, Suzy will be soon appearing a new SBS drama, “While You Were Sleeping,” which is set to premiere on September 27.

Suzy
Park Won
How does this article make you feel?