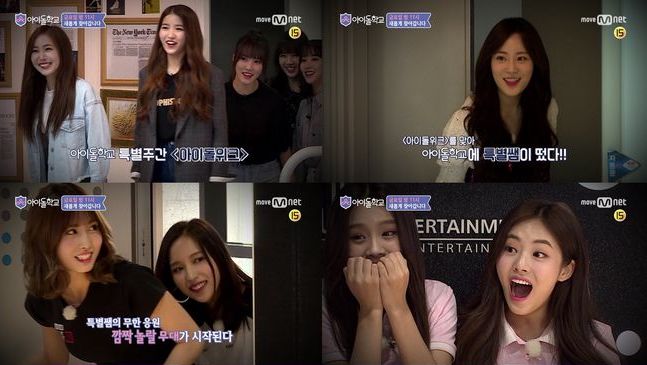 TWICE, GFRIEND, Apink, And More To Give Tips To “Idol School” Students + Show Moves To New Day And Time

Mnet has announced that “Idol School” will now be aired on a different day and in a new time slot, and also revealed some details about its upcoming episode.

On September 5, Mnet stated, “Starting from this week’s eighth episode, ‘Idol School’ will be moving to Friday at 11 p.m.”

“As there are only four episodes left until the finale and they are the most important, including the final exams and the selection of the members who will debut, the show has been moved to prime time,” they continued.

The September 8 episode of “Idol School” will show the students preparing for their final exams, and reveal some of their performances. The current students were split into six groups for the final exams and they will perform TWICE’s “Like OOH-AHH,” GFRIEND’s “Rough,” PRISTIN’s “WEE WOO,” KARA’s “Step,” S.E.S’s “I’m Your Girl,” and Apink’s “No No No.”

The students will be getting tips directly from members of these groups, and a preview of the upcoming episode shows hints of some of the exciting visits with the girl group members.

The final exams on “Idol School” will determine the top 18 out of the current 28 students, who will go on to the selection match to vie for a spot in the show’s nine-member group.

Watch a preview for this week’s episode below!