A growing number of fans of boy group CROSS GENE have begun demanding better treatment for the group following the decision to cast member Takuya in a Japanese musical.

Takuya’s involvement in the musical “Watashi no Host-chan [My host]” was announced by the musical’s official Twitter account on September 4. The notice was met with a mixed response as some CandYs [official name of CROSS GENE fans] showed concern at the content of the musical, which, fans say, involves the cast playing characters who are hosts and a voting system where people can “win” experiences with the cast members including hugs and other forms of physical interaction. 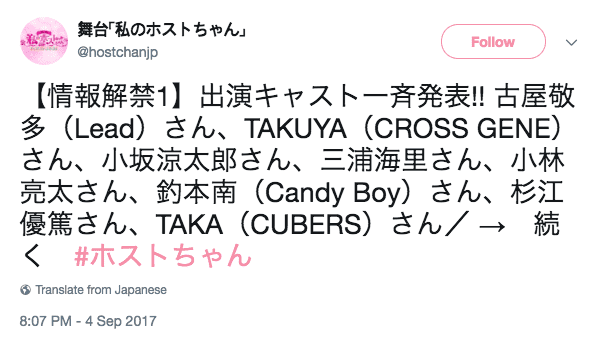 Following growing concerns from fans, CROSS GENE’s agency – Amuse Korea – addressed the issue through a post on the group’s official Daum fan cafe that read, “We are writing this notice because we have received e-mails and requests from some CROSS GENE fans who have written to us about Takuya’s January performances. ‘Watashi no Host-chan,’ which Takuya will be joining in January, began as a popular mobile game and has since transformed into a TV drama and since 2013, a musical production. It is a wonderful entertainment production that has garnered success in Japan.”

The notice continued to state, “We received a request to appear in the production company, and after careful consideration, we – including Takuya himself – came to the decision for him to appear in the musical. He is determined to do his best and create an enjoyable performance for everyone. Takuya is taking his new role seriously to create a great performance with the other cast members, who are active in a wide variety of fields, and we hope you will support him.”

However, fans were not satisfied with this response from the agency and the hashtag #크로스진은_가수입니다 [CROSS GENE are singers] has since spread on Twitter, with fans from many different fandoms joining in to show their support for CROSS GENE and their fans. A change.org petition has also been created to raise awareness of the issue.

Takuya
CROSS GENE
How does this article make you feel?