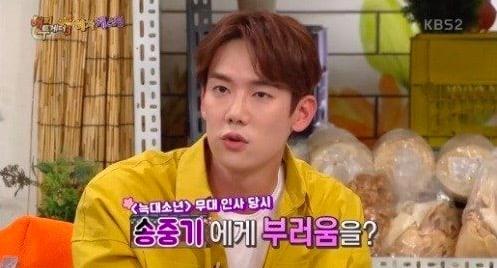 On the September 7 broadcast of KBS 2TV’s “Happy Together,” actor Yoo Yeon Seok revealed that he had been jealous of Song Joong Ki at one point.

To the question, Yoo Yeon Seok answered playfully, “About 5,000 audience members attended a screening event with myself and the other actors. After watching the movie, the audience clapped a lot. Song Joong Ki and Park Bo Young waved to the crowd so I followed suit, but the crowd pointed and booed at me.”

Song Joong Ki
Yoo Yeon Seok
Happy Together
How does this article make you feel?