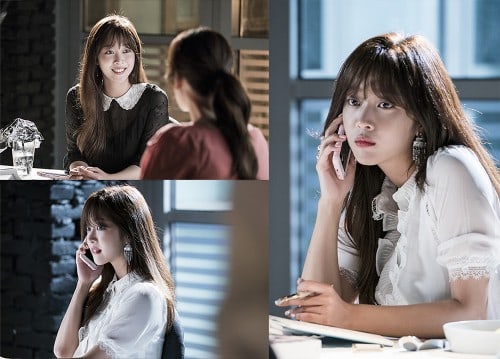 Jo Bo Ah plays Ji Hong Ah, an assistant writer who was born with a golden spoon in her mouth. Despite her wealthy background and her desire to be the center of the world, her character ends up losing everything and builds up her self-esteem only with the help of her friend Lee Hyun Soo (Seo Hyun Jin).

The actress dished on why she chose a role with an interesting take on the standard “rich girl” character. “The more I read the script, the more I became curious about Ji Hong Ah’s character,” she said. “I was drawn to it because I thought she would be fun to play.”

She continued, “If you look around you, there’s always one person who doesn’t hold back on what she wants to say. Hong Ah is that type of character.” When asked about Ji Hong Ah’s selfish side, Jo Bo Ah said in defence of her character, “I think most people think that they are the center of their own world. Hong Ah just doesn’t try to hide it. She’s an honest woman.”

Although her character has a good senior-junior relationship with Seo Hyun Jin’s character, their friendship runs into trouble with the appearance of Ohn Jung Sun (Yang Se Jong). However, the atmosphere on set couldn’t be any more different. “With Seo Hyun Jin, we always film in a fun atmosphere with good energy. I want to express well how Hong Ah’s emotions change for Hyun Soo, who is a close older friend and a talented writer.”