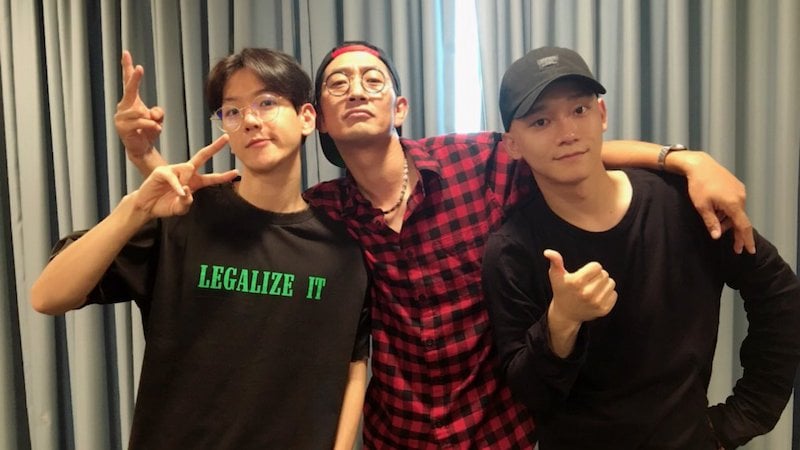 During a recent appearance on the September 9 broadcast of “Kim Chang Ryul’s Old School,” EXO’s Chen and Baekhyun opened up about various music-related topics such as singers they want to work with.

Baekhyun revealed that he wanted to collaborate with Bolbbalgan4, while Chen named 10cm.

Describing Bolbbalgan4’s music as the color “white,” Baekhyun explained, “Personally, I’m a fan because I really like their music and their voices. Their songs have an innocent feeling to them. I really want to try singing with them.”

Chen also elaborated on his choice, saying that he had been a fan since 10cm’s first album came out when he was in high school. “I really want to try my hand at the acoustic genre,” the singer said. “I practiced singing a lot with their songs. It’s a genre I really like, so I would like to attempt it once.”

The two EXO members also revealed whether they would still want to be singers if they were reincarnated. While Baekhyun said he would, Chen replied that he wouldn’t.

In addition to loving the act of singing itself, Baekhyun shared that another big positive of being a singer was being able to make people smile, and that he’s happy to be able to feel fans’ love. On the other hand, Chen took a more philosophical approach, and explained that he doesn’t know what the next “Chen” would want to do. Since he had already achieved his dream in this life, he supposed that his “next self” would want to challenge something else.

While both of these singers have several duet and solo tracks of their own, they revealed that they still feel most comfortable with fellow EXO members.

“It feels like I’ve lost all strength in my body when I’m alone compared to when I’m with EXO,” Baekhyun explained. “I felt lonely when I was filming my drama. The actors on set treated me really well, but I still missed my long-term friends.” Chen also added on his own experience of standing on stage during “King of Masked Singer,” saying, “I’ve never missed the members as much as I did back then. I felt more alone on stage without them to lean on.” The pair shared that while EXO doesn’t say many emotional statements to each other out of embarrassment, their honest support can be felt even through short phrases like, “Good luck,” and “You’re going through so much.”

Meanwhile, EXO is currently promoting their most recent title track “Power” from their repackaged album, which has seen great success both domestically and internationally.