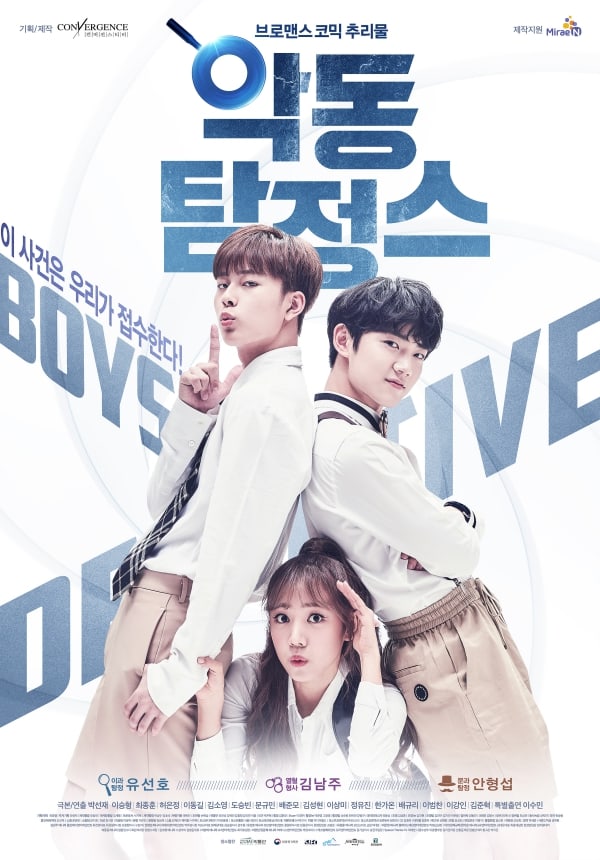 The web drama “Mischievous Detectives” is about two high school detectives, Oh Sung (Ahn Hyeong Seop) and Han Eum (Yoo Seon Ho), who lost their parents at an early age. As a cop, Jin Kyung (Namjoo) takes over as their protector and works to solve the mystery of their parents’ disappearance.

Director Park Sun Jae said, “Our purpose in making this production was to look at three aspects of society: the liberal arts point of view, the scientific point of view, and the humane point of view. We chose a genre that would express these three perspectives best.”

Ahn Hyeong Seop and Yoo Seon Ho appeared as trainees together on Mnet’s “Produce 101 Season 2.” Ahn Hyeong Seop said, “Before I debut, I thought that I’d like to try lots of things. I wanted to make memories that I would remember forever so I took on this challenge. I think it’s a good thing I did.”

Yoo Seon Ho said, “When I read the script, it was fun. It was my first time acting so I felt a lot of pressure but I chose this project in the end because of Ahn Hyeong Seop. It was the first time for both of us and difficult but I could depend on him.”

Namjoo said, “Working with these two, the most intimidating thing was ‘age.’ I felt nervous and pressured wondering how I was going to lead them. Their acting improved with every minute and I was really moved at times. Their energy on set and their synergy was amazing. I’m looking forward to their future.”

Ahn Hyeong Seop added, “It was my first time acting so I was really nervous. Even though I’m still lacking, I want to show people that I can get better. In particular, Namjoo helped us a lot at times when we didn’t know what we were doing. We learned a lot. I want to become a senior like her in the future.”

Yoo Seon Ho agreed, saying, “I’m glad I could work with Namjoo and Ahn Hyeng Seop. If it weren’t for the two of them, I don’t know how I would have done, so I’m really happy that it was the two of them. We made memories that I’ll never forget.”