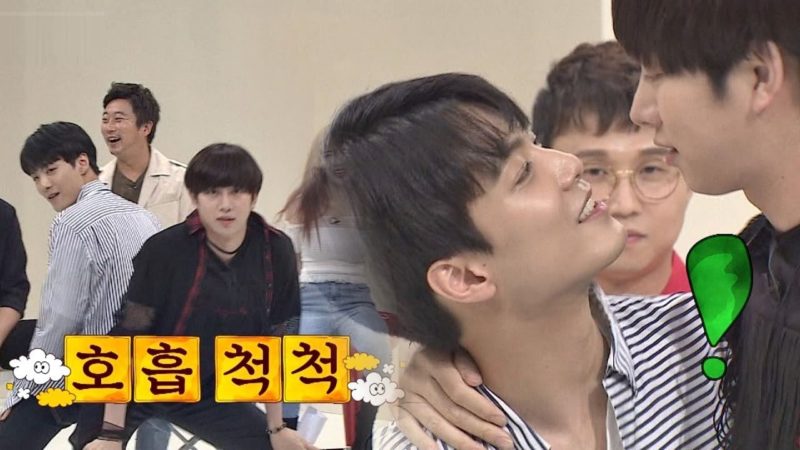 HyunA, NU’EST’s JR, and comedian Park Sung Kwang appeared as guests for episode 92 of “Ask Us Anything.”

In one corner of the show, Heechul, JR, and HyunA danced to her songs. First, Heechul and HyunA paired up and danced together to her song “Red.” Both of them danced with sincerity in the beginning until Heechul started to shake his bottom in a sexy manner that made HyunA burst into laughter and stop dancing. Lee Soo Geun commented, “I thought there were two HyunAs dancing.”

Next up was JR who declared he wanted to dance to HyunA’s song “Bubble Pop” because it would be difficult for her to keep standing up and sitting down if they did “Red.” The caption gave him ten bonus points for his consideration. HyunA acted cutely, but JR’s expression didn’t change at all. Even if she lightly touched his chest, his demeanor didn’t change and he continued to dance comfortably. HyunA admitted, “I think it was better that he did different moves [than my choreography].”

Last but not least, JR and Heechul danced together to HyunA’s song “Red.” They danced in a sexy and provocative manner that made HyunA giggle. When Kang Ho Dong insisted, “You must make eye-contact,” things started to heat up between the two idols and their great teamwork earned proclamations of awe from Lee Soo Geun.

NU'EST
Super Junior
Ask Us Anything
JR
Kim Heechul
How does this article make you feel?