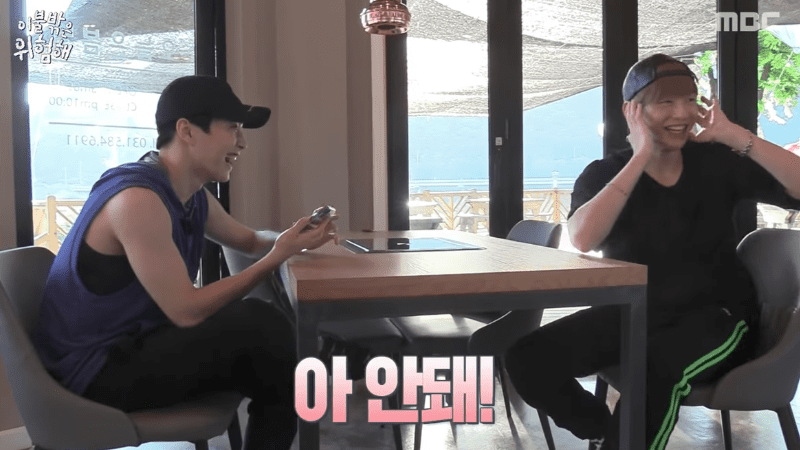 Watch: Kang Daniel Doesn’t Know What To Do With Himself When Xiumin Sees His Old Performances

EXO’s Xiumin and Wanna One’s Kang Daniel became even closer during the final pilot episode of “It’s Dangerous Beyond the Blankets” on September 10.

The episode featured the cast enjoying themselves a variety of games, such as water volleyball, a virtual reality game, and Jenga. With the task of going out to buy dinner on the line, Xiumin ended up losing not one, but two games of Jenga during the broadcast.

As the EXO member prepared to leave to go get dinner, his roommate Kang Daniel announced, “I like ‘Umin-hyung’ so I’m going to go with him.”

A laughter-filled car ride later, the pair arrived at the restaurant to buy grilled eel at Xiumin’s personal recommendation. While waiting, Xiumin playfully asked if he should search up “Kang Daniel” on Korean portal site Naver.

Shy at the prospect, Kang Daniel avoided the other’s eyes, until Xiumin said, “Should I watch your most recent performance?” The Wanna One member tried to block Xiumin’s phone as he answered, “Don’t watch please. I’m embarrassed.”

Xiumin continued on and scrolled through photos of his roommate, commenting, “You’re so cool.” Taken aback by the praise, the younger idol replied, “Don’t say that.” The EXO member hit the jackpot when he found a video that was titled “Kang Daniel’s Best Five Performances.”

As Xiumin watched with a smile on his face, Kang Daniel increasingly became even more flustered, and tried to cover the phone with his hat. He even jokingly commented to the restaurant staff, “You don’t need to give us vegetables, so please [prepare our order] as soon as possible.”

Echoing the commentary from the video, Xiumin complimented, “[You] showed decadence and sexiness at the same time,” to Kang Daniel’s continued embarrassment.

Check out the full adorable scene below!

EXO
Wanna One
Xiumin
Kang Daniel
It's Dangerous Beyond the Blankets
How does this article make you feel?