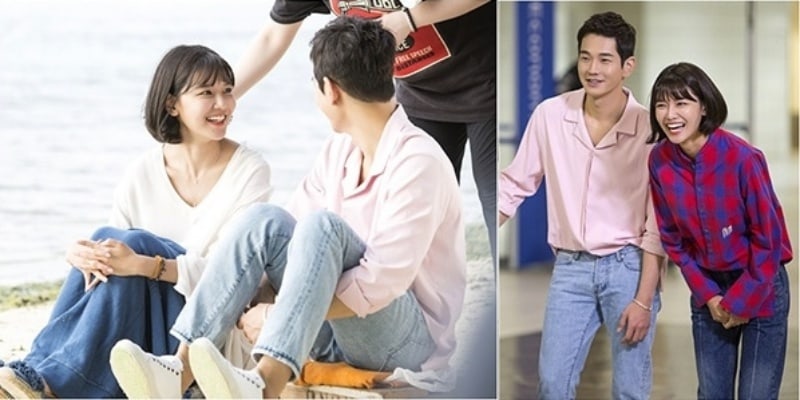 MBC drama “Man Who Sets the Table” has released behind-the-scenes stills of Girls’ Generation’s Sooyoung and On Joo Wan.

While the actual drama scenario turned out a little different, Sooyoung and On Joo Wan in behind-the-scenes stills are far from the pining couple in the drama. Even when they’re not shooting, they still display sweet chemistry. The pair is always smiling at one another, sometimes laughing with their white teeth showing.

On Joo Wan also appears to be a gentleman, as he brushes off sand from Sooyoung’s face and picks away a stray eyelash with a careful touch in the pictures.

On the fourth episode of “Man Who Sets the Table,” Lee Ruri (Sooyoung) and Jung Tae Yang (On Joo Wan) affirmed their affection for each other, but were caught by Ruri’s father Shin Mo (played by Kim Gab Soo) while kissing. This led Lee Ruri to confess her feelings to Jung Tae Yang and say she’ll return to him after getting her father’s permission. However, Jung Tae Yang took a step back and told Lee Ruri he only kissed her because he was caught up in the moment.

Hurt by his comment, Lee Ruri returned to Korea and tried to forget about Jung Tae Yang, but only found herself still reminiscing about him. Jung Tae Yang was no different as he thought of Ruri by himself in Guam.

“Man Who Sets the Table” is a comical family drama that depicts a middle-aged man trying to bring his family together when his wife suddenly announces a divorce. It airs every weekend at 8:45 p.m. KST.

You can watch the latest episode of “Man Who Sets the Table” at the link below!

Girls' Generation
On Joo Wan
Sooyoung
Man Who Sets the Table
How does this article make you feel?