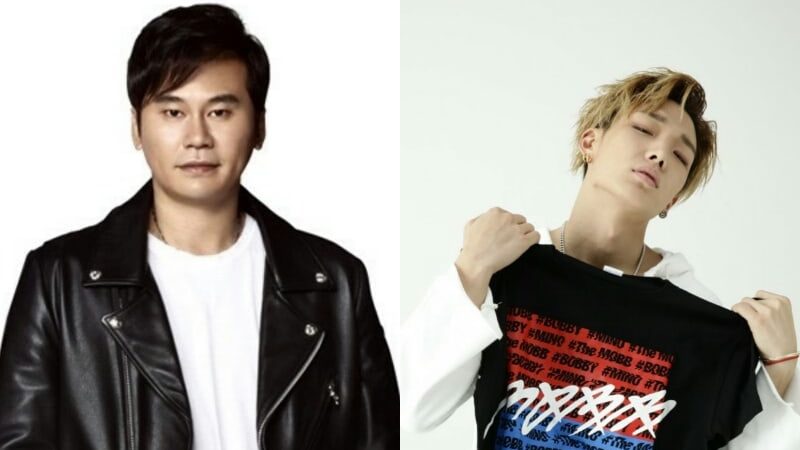 On September 14, iKON’s Bobby released his first solo album “LOVE AND FALL,” and YG Entertainment Agency’s CEO Yang Hyun Suk opened up about it for the first time.

It has been three years since Bobby debuted in iKON, and his very first solo album is full of his stories. At the press conference, Bobby revealed he was able to get a full solo album because he constantly sent music to Yang Hyun Suk. In response, Yang Hyun Suk laughed while saying, “I think Bobby said that because he is humble,” revealing that just sending songs to him isn’t a guarantee that a full album will be released.

Yang Hyun Suk proceeded to praise Bobby, saying, “I think I’ve heard all the songs on Bobby’s album at least a hundred times while helping him. Personally, I think his songs are very refreshing, and I think all of his tracks will be hits. It feels like I’m watching a drama script of Bobby developing and maturing as he ages. In my opinion, his first solo album leaves a deep impression, and it’s like a page of his fun screenplay.”

He further stated, “The most unusual aspect of Bobby’s solo album is that it is 180 degrees different from the music he showed on ‘Show Me The Money’ and with iKON. In ‘Show Me The Money,’ Bobby showed potential as a rapper, whereas in iKON, he has he clearly showed his position in the years he has promoted with the group.”

Yang Hyun Suk expressed how highly he thinks of Bobby’s capabilities by mentioning that, following BIGBANG, it is rare to release an album with ten songs in it. In the interview, Yang Hyun Suk said, “Personally, I think Bobby’s album that is being released today exceeds expectations. Rather than telling him ‘good job’ though, I’d like to tell him to not forget his original goals and work harder.”

If you haven’t checked out Bobby’s new music videos yet, check them out below!

iKON
Bobby
Yang Hyun Suk
How does this article make you feel?