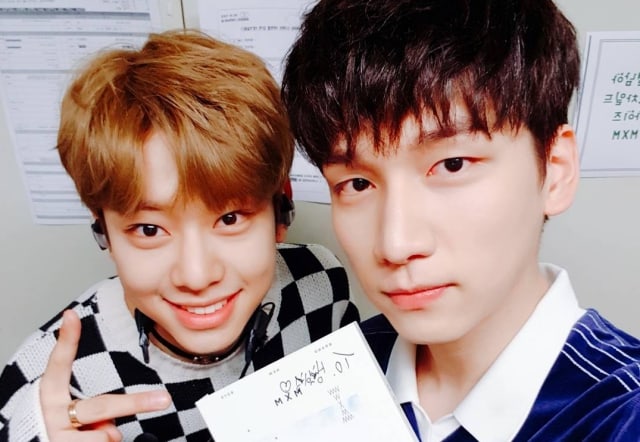 VIXX member Hyuk uploaded a photo on his personal Instagram account of himself with MXM member Kim Dong Hyun, as well as a shot of his signed copy of MXM’s new mini album.

It is common for senior singers to show support for newly debuted singers and groups. However, the caption reveals a surprising backstory to their friendship.

The caption said, “My ‘mom’s friend’s son’ debuted, who cutely brought me drinks saying he would cheer me on when I film a movie.” An abbreviation for “mom’s friend’s son” is used in Korean slang to refer to a seemingly perfect person that a mother might use as a comparison when trying to motivate their own child.

Hyuk continued, “I hope you will continue promotions with a healthy body and mind. Although I’m lacking myself, let’s become great singers. Good luck!!”

From the last hashtag, it appears that they know each other because their moms are friends. They also seem to have the same vocal teacher named Yuri according to the last hashtag. What a small world!

Both Lim Young Min and Kim Dong Hyun signed their mini album for Hyuk. Kim Dong Hyun added the message, “I made my debut. Everything is still new and strange, but I’ll become a cool singer like you!! Thank you.”

Kim Dong Hyun was a popular contestant on “Produce 101 Season 2” who recently made his debut as a member of the duo MXM. They are currently promoting their song “I’m the One.“