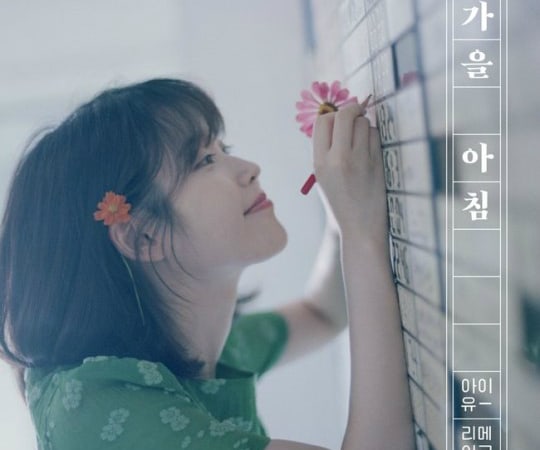 IU surprised her fans this morning with the gift of an early release of the track “Autumn Morning!” This is one of the many songs that will be included in IU’s upcoming second remake album “Flower Bookmark 2.”

At midnight of September 18, IU uploaded the spoiler of a photo and the caption, “9 years since I’ve lived as IU. I’m happy I’m IU. UAEANA start your day in a good mood. Later today, open your present at 7 in the morning. UAEANA I round you a lot!!!!”

Last night’s episode of JTBC’s “Hyori’s Homestay” also played a short clip of “Autumn Morning” as the background music, but since the song wasn’t yet released, it may have gone unnoticed to the untrained ear. “Autumn Morning” is a hit song by “the godmother of Korea’s folksongs” Yang Hee Eun that was released in 1991. IU’s remake was arranged and produced by genius guitarist Jung Sung Ha, along with musician Ha Rim playing the teen whistle for added analog sentiments.

In regards to the surprise release of “Autumn Morning” at 7 a.m. KST, IU’s agency, Fave Entertainment said, “7 a.m. isn’t a time that gets counted towards music chart rankings, so it’s not usually a time when new songs are released,” then continued, “Regardless of the rankings, IU wanted to help her fans have a beautiful start to fall. It is a heartfelt present from IU.”

IU’s second remake album “Flower Bookmark 2” will be released on September 22, and so far details about the lead actor in her music video, cover image, and teaser have been released. The singer will perform the tracks for the first time in front of her fans at her upcoming fan meeting.