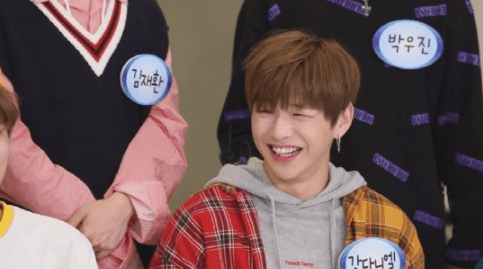 Wanna One Talks About Their Love For Chicken, Quitting Gummies, And More During New Interview

Wanna One will be appearing on “One Night of TV Entertainment.”

The show reveals a first look at Wanna One’s filming set for their latest commercial for chicken, and despite filming in the morning to the late evening, the members are filled with energy and playfulness.

In the upcoming appearance, the members create fun situations like holding a sports competition to decide who gets the solo camera shot, and they also reveal that they asked for five or six refills of chicken. They choose Park Ji Hoon as the member who particularly likes chicken, saying, “He doesn’t even like to leave out the cartilage.”

During their interview, Kang Daniel brings up how he was constantly eating gummies on the show “It’s Dangerous Beyond the Blankets” and shares, “I quit eating gummies.” The show will be revealing the unfortunate reason behind his decision to quit eating them, a video of Kang Daniel during his high school days, and a demonstration of his modern dance skills.

In addition, Park Ji Hoon does his famous aegyo and attempts a dance move from Sunmi’s “Gashina” with Ong Sung Woo’s imitation of a Haegeum (a Korean traditional instrument) as the background music, causing everyone to laugh. The Wanna One members also reveal that their parents held a party for them after their debut, and that Lai Guan Lin’s favorite older member is Ong Sung Woo.

Meanwhile, Wanna One’s appearance on “One Night of TV Entertainment” is set to air on September 19 at 8:55 p.m. KST.