After accepting their award, Suho said, “We’re happy to be able to receive Daesang at the first [Soribada Awards], and are sincerely grateful. Thank you to Lee Soo Man, all the staff, and our SM family. I believe we were able to receive three awards, including this Daesang, because of our EXO-Ls. This is our first Daesang with this year’s album, which is really meaningful…2017 is coming to an end, but this is just the start for EXO. We hope you look forward to the remainder of our promotions. We are one! EXO, let’s love! Also, our members Chanyeol and Lay who could not be here with us today, we miss you and love you.” 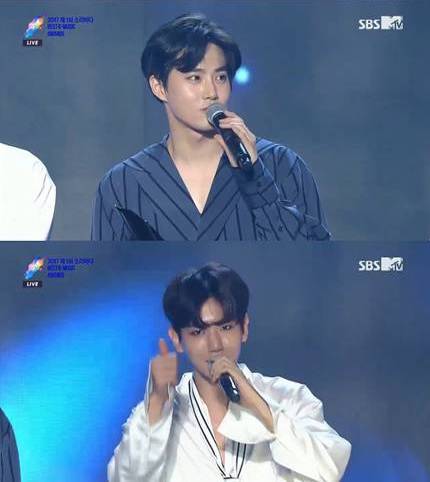 Baekhyun added, “…thank you for waiting for us to make a comeback. I want to say thank you for giving us strength and showing us love when we finally returned. EXO-Ls, we always love you, and thank you for supporting us.”

Sehun expressed that he hoped that the fans would always be healthy, while Kai commented on how special it was to be able to receive this award on the eve of Chen’s birthday. Chen simply shouted, “I love you EXO-Ls,” while Xiumin said, “Thank you to EXO-Ls for making us shine again this year and raising the value of EXO’s name. All the members are happy, so I hope that all of our fans will always be happy as well.” D.O. stated that they would work hard to be always be “well-mannered EXO.”

EXO released their album “The War” just a few months ago in July 2017, breaking many of their personal records and setting new ones, such as a new record for first week album sales. In just 24 days since of the release “The War,” EXO made history by earning the title of quadruple million seller. The group recently made a comeback with their repackaged album and its title track “Power,” and now has over 100 domestic music show wins under their belt.

Congratulations to EXO and EXO-Ls! Check out all the performances from the awards show here!

EXO
1st Soribada Best K-Music Awards
How does this article make you feel?