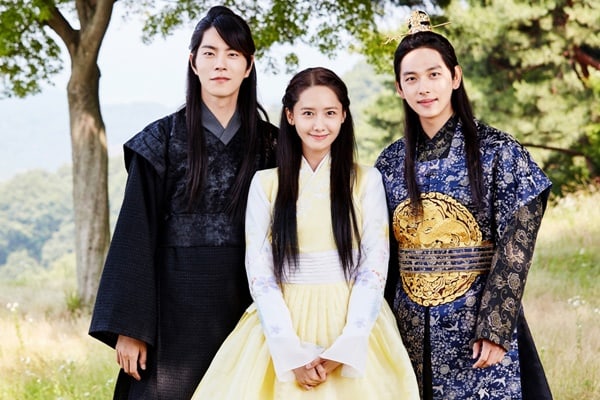 As her MBC drama “The King Loves” wrapped up its run, lead actress YoonA sat down for an interview to talk about its ending.

Many people were drawn to the love triangle between YoonA, Im Siwan (Wang Won), and Hong Jong Hyun (Wang Rin). In the end, Im Siwan chose to let his love for YoonA go. When asked if this was a happy or sad ending, YoonA said, “To those who liked Rin-San, it was a happy ending, and to those that liked Won-San, they might have been disappointed. Since I was just San, I liked everyone.”

She shared that the scene where Won says goodbye to his friend and love was actually the last scene they filmed together.

YoonA also said, “Many people were curious about San’s feelings. Even I had to go to the end to realize that Eun San liked Rin. In the original novel, the story ended with Rin-San getting together, but I wondered if it would change during the dramatization. But by the time the last script came out, I knew for sure it was going to be Rin-San.”

However, she did have some regrets about the ending. “If I’d known a little earlier, I could have expressed my feelings more clearly towards Won and Rin. The viewers were confused and there were times when I was confused as well. I think even the writer was thinking about it until the end.”

But she added, “On the other hand, I think the mystery of who she would choose had a good influence overall. I think maybe San didn’t know herself that she liked Rin. He always came to save her and showed up whenever she needed support, so I think her heart opened little by little. I think that when she learned it was Rin who saved her on the roof, she fell in love with him. I asked the female staff who they thought San liked, but there were different opinions there too, just like with the viewers.”

She continued, “I’ve been asked, ‘Weren’t you worried Eun San would appear fickle?’ But I tried to express that San liked Won as a person and a friend, while Rin made her heart flutter more. However, the main point I focused on was that San didn’t want to get in the way of their friendship.”

“The King Loves” aired its final episode on September 18.