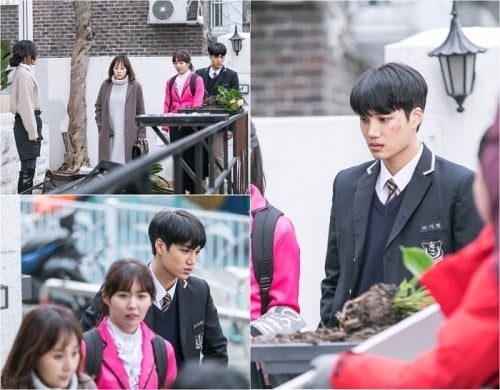 It looks like EXO’s Kai will be experiencing trouble on the first episode of KBS’s upcoming youth drama “Andante.”

Kai, Lee Ye Hyun (who plays his younger sister), and Jun Mi Sun (who plays their mother) can be seen in the newly released still cuts. The location they are in happens to be the cafe that Kai’s mother and aunt runs together. In their surroundings, tables and chairs have been turned upside down, and even a plant has been pulled by its roots.

Even amidst all this chaos, Jun Mi Sun seems relatively calm as she is trying to come up with ways to survive with her children. Beside her, Lee Ye Hyun looks like she’s in disbelief about the situation. Meanwhile, Kai appears worried, and yet, his eyes are hollow, as if there’s something else that is troubling his mind.

“Andante” tells the story of a teenager named Si Kyung (played by Kai) from the city who transfers to a strange school in the countryside. The first episode will air on September 24 at 10:10 a.m. KST.