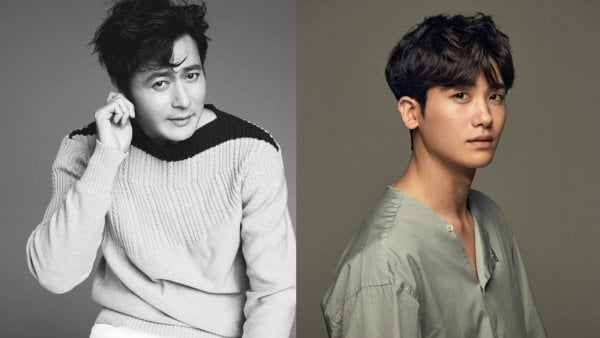 A Korean remake of the popular US television program “Suits” is underway, and Jang Dong Gun and Park Hyung Sik will be headlining the drama!

“Suits” is an ongoing legal drama series in the US that is currently in the middle of its seventh season, set to resume at the beginning of next year. It takes place at a fictional New York City law firm, and explores the chain of events that occur after talented attorney Harvey Specter hires college dropout Mike Ross as a law associate even though he initially has no license to practice law.

Jang Dong Geun will be returning to the small screen for the first time in five years after “A Gentleman’s Dignity” through this remake of “Suits.” He will be playing Choi Kyung Seo, a legendary lawyer at Korea’s best law firm, or the apparent equivalent of Harvey Specter in the original.

In his next project after “Strong Woman Do Bong Soon,” Park Hyung Sik will be playing the role of Go Yeon Woo, the Korean counterpart of Mike Ross who has a monstrously accurate memory. In line with the original premise, his character joins the law firm after Lawyer Choi (Jang Dong Gun) personally selects him.

This upcoming production also marks the first time that “Suits” will be remade in another country. Kim Jung Min will be writing the script, while Kim Jin Woo of “Mystery Queen” will be directing the drama. KBS-affiliated production company Monster Union, known for “Queen for 7 Days” and “The Best Hit,” will be in charge of production.