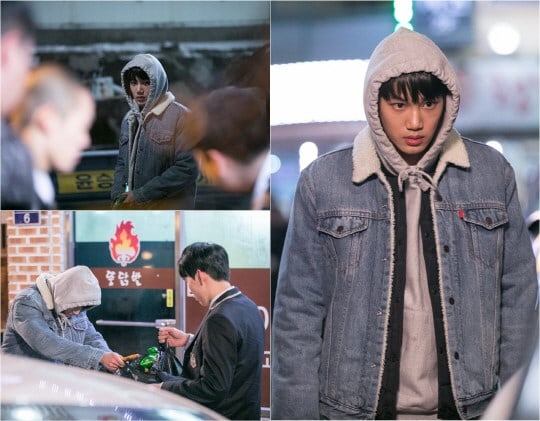 EXO’s Kai Runs Into Trouble In Stills From Upcoming Drama

After previously revealing stills of EXO member Kai as a rebellious high school student, fighting with his mom, interacting with his sister, and giving a glimpse at his family problems, KBS has now released another set of stills of Kai in the upcoming drama “Andante.”

In the drama, Kai plays the role of Si Kyung, a high school student from Seoul who transfers to the countryside, in which he experiences many new things. The released stills show Kai in a gray hoodie on his way home after buying some snacks. However, he spots gangsters in an alleyway and freezes on the spot. Despite wanting to walk away, he is unable to move and has fear in his eyes.

Spotting him, the gangsters stand in front of him. Kai looks down because he is scared to look at them in the eye, and hands them an envelope and the snacks he purchased.

A source from the drama said, “The scene of Kai’s encounter with the gangsters is a main event in the configuration of the beginning plot of the drama,” and also hinted that it will reveal one of the biggest reasons why Si Kyung decided to transfer from Seoul to the countryside.