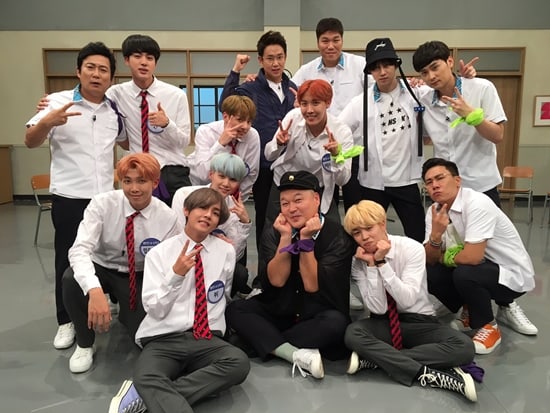 Watch: BTS Show Off Their Dance Skills On “Ask Us Anything”

BTS got to show off their dancing skills on the September 23 episode of JTBC’s “Ask Us Anything.”

First up was Jimin and J-Hope, who performed a dance cover of Seo Taiji’s 1992 track “Through Tonight Growing Late.” The boys learned the dance directly from the veteran musician himself.

As the boys prepared to perform their dance, the rest of the cast became increasingly excited, saying that they were already feeling nostalgic. Eventually, the entire room became pumped with their performance and started dancing along!

After the performance, the boys talked a bit about their experience with Seo Taiji. J-Hope opened up by saying “He is an idol to us as well. We got to stand with him on stage and recreate this song. That’s how we were able to learn the dance directly from him. He worked with us on each detail. He even used respectful language with us.”

When asked how the experience was for them, the Jimin answered, “He has always been an influence for us since the time we debuted. When we went to his 25 year anniversary concert, we were all crying.”

V wrapped up the story by revealing that Seo Taiji told them to call him “Dad.”

Finally, the boys showed off their individual dance moves in a “10 second” dance contest. Take a look at who came out victorious below!

BTS
J-Hope
Ask Us Anything
Seo Taiji
Jimin
How does this article make you feel?